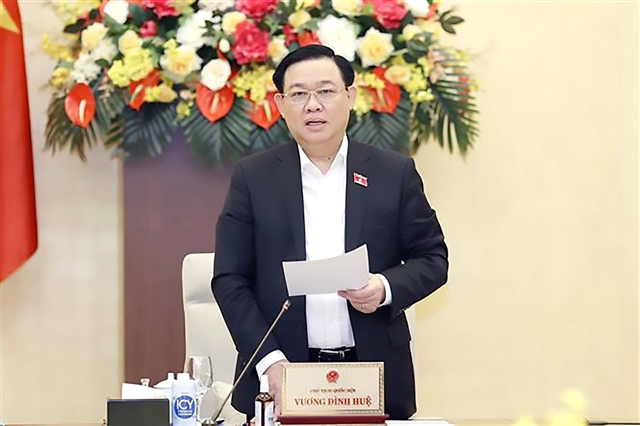 HÀ NỘI — National Assembly (NA) Chairman Vương Đình Huệ on Wednesday emphasised the need to evaluate the responsibilities of each agency of the NA, Government and ministries in studying and handling voters’ petitions.

Speaking at the 11th meeting of the Standing Committee of 15th NA, Huệ said that petitions and recommendations were promptly resolved, which contributed to solving the difficulties of people and businesses.

“It is necessary to candidly acknowledge and evaluate the shortcomings and limitations, especially those that affect the legitimate rights and interests of people and businesses,” Huệ said, adding that the 15th NA tried to better listen and address voters’ desires.

As the NA Standing Committee’s three-day meeting planned to discuss additional assessment reports on the performance of socio-economic development tasks, the State budget in 2021 and those in the first months of 2022, Huệ asked for a higher quality of reports that were planned for the third meeting of 15th NA in the next two week.

Huệ asked all NA committees that are involved in the issues in the reports to raise opinions so that the reports would be completed better.

NA Chairman Huệ said that the five important national projects were under the National Assembly’s authority to decide on investment policies and had diversified funding sources.

He said that it was important to discuss the necessity and urgency of the investment projects, the suitability of projects to approved master plans or strategies, forms of investment, and the structure of investment capital, especially the feasibility of the capital source.

As the NA Standing Committee planned to examine the draft resolution promulgating the amended regulations for the coming NA session, Huệ said that the amendments would help innovate and improve the NA’s performance towards professional and modern operation, strengthened democracy and the rule of law.

At this meeting, the NA Standing Committee is expected to decide on the establishment of Phương Sơn Town in Lục Nam District and Bắc Lý Town in Hiệp Hòa District of Bắc Giang Province.

The NA Standing Committee would also consider the proposed plan to allocate capital from the central budget between 2021 and 2025 for ministries, central and local agencies to implement three national target programmes.

Besides in-person discussions during the meeting, the NA Standing Committee also collected written opinions about the final State budget report in 2020, the State Audit’s audit report on the use of resources for disease prevention and control, and the proposal for adjustment of the laws and ordinances building programme in 2022.

According to a Government report, the implementation of the socio-economic development plan in the first four months of this year saw many synchronous solutions to ensure supply and stabilise prices of gasoline and food, and maintain interest rates and foreign exchange rates.

The COVID-19 pandemic is basically under control, which is the foundation for effective implementation of the roadmap to fully open international tourism from mid-March, open schools and entertainment culture artistic services.

Việt Nam’s socio-economic situation in April, and the first four months of this year overall, achieved positive results, with the first quarter’s GDP increasing by 5.03 per cent over the same period.

The macro-economy is stable, inflation is controlled and major economic balances are secured, according to the report.

Chairman of the NA Economic Committee Vũ Hồng Thanh said that the implementation of the socio-economic recovery and development programme was still slow due to the delay in issuing relevant legal documents.

Consumer price index (CPI) in the last four months increased by 2.1 per cent, not higher than the same period in 2018-2020, but in the context of record-high energy prices in the world and domestic demand tending to recover, the fuel prices could put great pressure on to inflation, he said.

The disbursement rate in the first four months of this year was 18.48 per cent, equivalent to the same period in 2021. However, all 17 ministries and central agencies have not yet fully disbursed capital. Therefore, the economic committee proposes to clarify the reasons of the delay in disbursement, Thanh said.

He said that the phenomenon of price manipulation appeared in Việt Nam’s stock market in a complicated manner. Enterprises, listed companies and investors failed to fulfil their obligations in information disclosure and a large number of new investors lack financial knowledge or care little about business performance, which poses risks of losses and could lead to unsustainable market growth.

The official also suggested that the Government clarify the situation of land prices pushed in land auctions for-profit and the phenomenon in which real estate brokers jointly make prices, causing land fever and destabilising the market. The allocation of land without auction causes losses to the State budget and reduces land-use efficiency in projects.