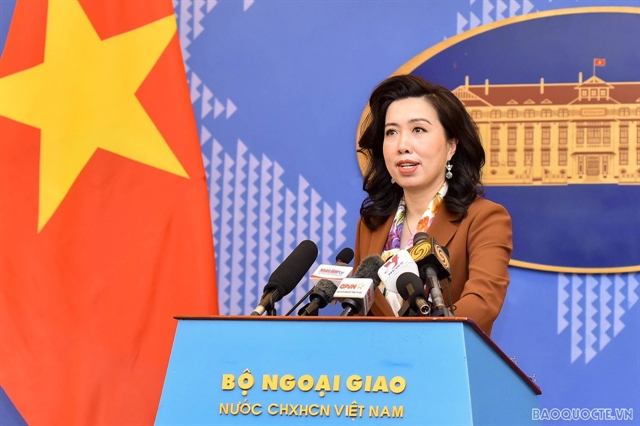 HÀ NỘI — The repatriation of Vietnamese people who are in extremely difficult circumstances abroad and wish to go home amid the COVID-19 pandemic is a sound and humane policy of the Party and the State, spokesperson of the Foreign Ministry Lê Thị Thu Hằng affirmed.

She noted that it was also a very important and unprecedented task assigned to the National Steering Committee for COVID-19 Prevention and Control, relevant ministries, agencies and localities, and Vietnamese offices in foreign countries, when speaking at the ministry’s regular press conference held on Thursday.

Asked to share her views on the case that some individuals of the Consular Department under the Foreign Ministry were prosecuted and detained for “taking bribes” in connection with the repatriation of Vietnamese abroad, the spokesperson stressed that in the context of fighting an unprecedented pandemic with limited medical capacity, Việt Nam was one of the very few countries in the world that had continuously conducted repatriation flights, which had been appreciated by Vietnamese at home and abroad and the international community.

Since the first flight carrying Vietnamese citizens in China’s Wuhan City, the original epicentre of the COVID-19 pandemic, back to Việt Nam in early February 2020, more than 1,000 similar flights had been operated, bringing home 240,000 Vietnamese from 60 countries and territories safely, Hằng said, stressing that the case of some individuals abusing their position for personal gains, therefore, could not negate such efforts and results.

She also emphasised the Foreign Ministry’s consistent view on zero tolerance to any wrongdoing, and all violations of law must be handled in line with legal regulations.

The ministry had closely coordinated with competent agencies to investigate the case, and had suspended the officials involved from their positions to serve the investigation, she added.

The ministry has also asked domestic agencies and Vietnamese representative offices abroad to quickly review their working procedures and make any necessary changes to ensure efficiency and transparency, enhance administrative disciplines and work ethics, conduct serious and regular inspections and supervision, especially those on administrative procedures, consular affairs and citizen protection, and promptly prevent as well as strictly handle any signs of degradation in political ideology, morality, lifestyle, self-evolution and self-transformation, and acts that abuse position and power for personal gain, according to the spokesperson.

In related developments, especially concerning the situation in Ukraine, Hằng said the foreign ministry had asked the Vietnamese Embassy in Ukraine to announce a hotline on citizen protection to provide timely support for Vietnamese people there when necessary.

The embassy was also requested to keep a close watch on the situation in Ukraine, closely coordinate with local competent agencies and maintain contacts with Vietnamese associations, she continued.

Hằng said the embassy’s staff had visited Vietnamese people in some areas, and found that there had been no major disturbances in their daily activities so far.

Regarding the case of a Vietnamese trainee being horribly abused during his work in Japan, Hằng said after learning about the incident, the Vietnamese embassy there had held a working session with Japanese competent agencies to verify the case and ask for investigation.

“The embassy’s officials also visited the man whose physical and mental health is stable now,” the spokesperson added.

The Japanese Minister of Justice on January 25 has asked the Immigration Services Agency of Japan to quickly conduct an investigation and handle individuals involved, and requested relevant firms to act to improve the support and protection of trainees.

Japanese authorities have suspended the reception of foreign technical trainees at the company where the incident occurred. The firm also admitted to its wrongdoings and pledged to compensate the trainee.

According to the spokesperson, the remaining Vietnamese trainees at this company have been moved to the management agency and they may be transferred to other workplaces.

The MoFA has directed the embassy to keep a close watch on the case and stand ready to take measures to protect the legitimate rights and interests of Vietnamese citizens. — VnExpress News