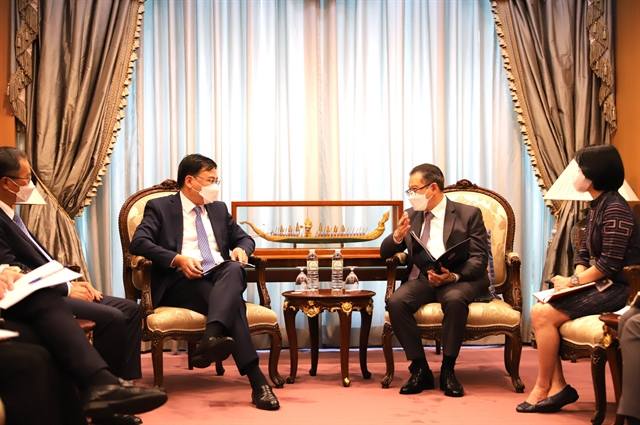 BANGKOK — Acting Permanent Secretary for Foreign Affairs of Thailand Sarun Charoensuwan has suggested Việt Nam and his country work together to further promote two-way trade, towards reaching the goal of US$25 billion by 2025.

Sarun was speaking at a meeting on May 9 with Vietnamese Deputy Foreign Minister Phạm Quang Hiệu, during which the host called on the Vietnamese Government to pay attention to supporting Thai investment projects in the field of renewable energy.

Hiệu, who is also head of the State Committee for Overseas Vietnamese Affairs, proposed Thailand continue to consider speeding up procedures to increase the number of Vietnamese agricultural products imported to the Thai market.

He suggested the two sides soon recognise each other’s vaccine passports in order to further make it easier for investment, trade and tourism cooperation, saying that this would not only help facilitate travel between the two countries but also contribute to forming tourism links from Thailand to Việt Nam and vice versa.

They agreed to effectively implement the Memorandum of Understanding (MoU) on cooperation between the two foreign ministries, including enhancing the sharing of experience in digital and public diplomacy.

In the context that the two countries have done well controlling the COVID-19 pandemic and opened their countries, the two foreign ministries should actively coordinate and soon arrange visits by senior leaders and organise the 4th joint cabinet meeting, and implement exchange mechanisms between the two ministries in 2022.

They agreed to work together to promote relations between the twin provinces of the two countries, and effectively and practically implement their cooperation agreements and programmes.

Previously, Deputy FM Hiệu had a meeting with the Vietnamese community in Bangkok, and visited a number of business establishments of Vietnamese expats living and working in Thailand.

During his trip, Hiệu and the delegation of the State Committee for Overseas Vietnamese  Affairs also attended ceremonies to attach Vietnamese nameplates to the Tam Bảo (whose Thai name is Wat Aphay Phati Kram) and Ngọc Thanh (Wat Anna Duoikai Tralom Prachom Phatsakan) pagodas of the Vietnamese community in Thailand. — – VnExpress News