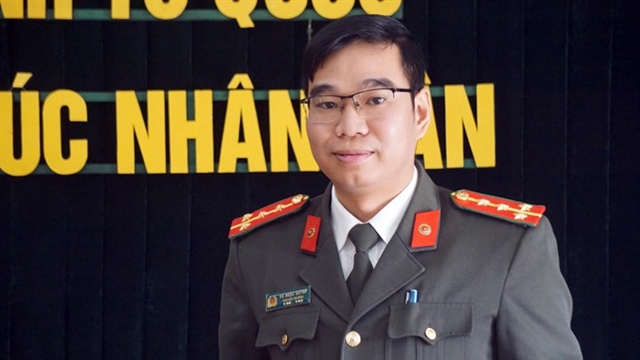 HẢI PHÒNG — A young Vietnamese police captain has won widespread acclaim for his commitment to taking down high-tech international criminals.

After 10 years of working at the Internal Political Security Department of Hải Phòng City Police, Captain Vũ Ngọc Quỳnh has become the “enemy” of many criminals in Việt Nam.

Quỳnh, 34, has helped dismantle a vast network of transnational fraudsters and gambling rings.

Born into a family of poor farmers in the countryside of Tiên Lãng District in Hải Phòng northern port city, from a young age Quỳnh wanted to become a soldier in the people’s armed forces.

After graduating from high school, Quỳnh took the entrance exam to the Military Technology Academy but narrowly missed out and failed.

Not discouraged, the young man returned to his hometown to work as an employee while studying to re-take the exam.

In 2007, Quỳnh passed to enter the Security Academy and became the first person in his commune to study a public security major.

As a student, Quỳnh showed the qualities of a police soldier when he won a Silver Medal at the Karate Martial Arts Championship for public security schools. He also gave blood and helped the disadvantaged.

Assigned to the Internal Political Security Department of Hải Phòng City Police when the internet was fast developing and high-tech criminal gangs were proliferating, Quỳnh quickly got involved in many significant projects.

He told Tiền Phong (Vanguard) newspaper that high-tech crimes are not as aggressive and reckless as drug crimes, but their scope and influence was not only within the country but involved many countries and territories.

Such criminals are skilled and anonymous in cyberspace, making surveillance and investigation difficult.

If crimes are not solved quickly, evidence such as machinery and equipment can be destroyed.

In 2014, a group of dozens of foreigners rented several villas in an urban area of Hải Phòng to operate an international fraud ring. They called people outside of Việt Nam in fraud and property scams based on a pre-arranged script.

To avoid detection, the gang rented houses at very high prices and often changed locations. They installed surveillance cameras around their residence, sealed the windows, and rarely left the properties.

Aware of the situation, the Hải Phòng City Police coordinated with the Department of Cybersecurity and High-Tech Crime Prevention and Control to set up a special project.

This was the first such investigation Quỳnh participated in, directly scouting and helping the project board develop a plan to solve the case.

After nearly a month of surveillance, an opportunity came and police raided and arrested 42 Chinese nationals.

Chi Chin Hao, a dangerous criminal wanted by Chinese Public Security in 28 international fraud cases, rented a huge farm, isolated from the residential area of Tiên Lãng District, with only a single road in and out.

After a short time scouting, Quỳnh reported to the special investigation team and advised on the plan to arrest the Chinese criminal and his associates.

When Chi Chin Hao and his gang were asleep, Quỳnh and his forces broke into the farm, capturing the men involved.

In 2019, Hải Phòng City Police cooperated with the Ministry of Public Security to conduct a special investigation to fight a transnational gambling and betting ring.

After many successful investigations, Quỳnh was trusted and assigned reconnaissance tasks.

The criminals were Chinese, renting the entire Our City urban area, which covers more than 43ha in Dương Kinh District.

Reconnaissance was difficult as the gang did not go out or receive Vietnamese people. They installed a camera system and encrypted doors, which dozens of people guarded all day long.

Breaking into the den, Quỳnh was surprised to discover a professional international gambling organisation with hundreds of foreigners, divided up for different tasks.

After days of investigation, he stays up at night to make statistics, and location maps of individual criminal activity. Sometimes he works until the morning to report to his leaders on time.

The information he collected helped the project board provide appropriate countermeasures and battle plans.

Finally, Quỳnh and more than 1,000 colleagues arrested 395 people participating in a transnational gambling and betting ring with transactions of nearly VNĐ13 trillion (US$567.4 million).

The police seized more than 500 computers and more than 2,300 phones. All evidence was then handed over to Chinese police for further investigation.

“I’m lucky to have a family who understands my work. I have comrades and teammates who always support me when I need to complete my tasks,” Quỳnh said.

Last year, Captain Vũ Ngọc Quỳnh was awarded a certificate of merit by Prime Minister Phạm Minh Chính for his achievements in fighting and preventing crime.

The Ministry of Public Security also awarded him a certificate of merit for his achievements in the “For Homeland’s Security” movement. Recently, he was nominated as one of the Top 20 Exemplary Young Faces of Việt Nam 2021. — VnExpress News