PetroVietnam surpasses oil exploitation by 22 per cent in January-May 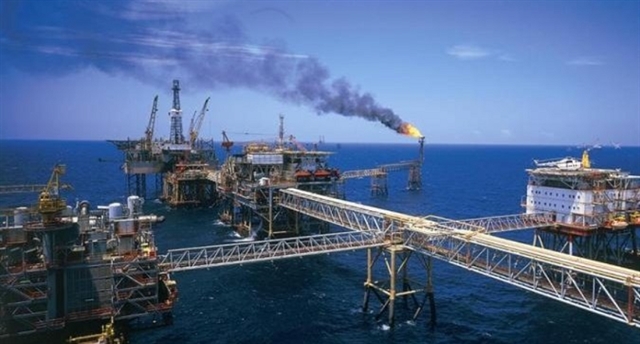 An offshore project of PetroVietnam. PetroVietnam earned an estimated VNĐ372.2 trillion (US$16.05 billion) in revenues in the five-month period. — Photo petrovietnam.vn

In the period, the group faced numerous difficulties as the Russia-Ukraine conflict has prolonged for more than 100 days, causing disruption to supply chains, pushing up prices of power and materials, as well as transport and production costs.

Besides, existing oil and gas mines have seen big reductions in output while the exploitation of new ones is hindered by regulations.

In such difficult circumstances, PetroVietnam has undertaken a range of measures to maintain output and stable operation, including technical solutions to increase output.

Along with crude oil, the production of other products such as gas, electricity, nitrogen fertilizer and petrol and oil has also been kept at high levels, meeting market’s demand. Petrol and oil output, excluding that of the Nghi Sơn Refinery, totalled 2.79 million tonnes in the five-month period, exceeding the five-month target by 8 per cent and achieving 46 per cent of the yearly plan. The output rose 20 per cent from the same period last year.

The group also turned out 776,400 tonnes of nitrogen fertilizer, up 20 per cent year on year and meeting 46 per cent of the yearly plan.

As a result, PetroVietnam earned an estimated VNĐ372.2 trillion (US$16.05 billion) in revenues in the five-month period, surpassing the five-month revenue plan by 63 per cent, and up 58 per cent from the same period last year.

The group contributed VNĐ52.8 trillion to the State budget, up 59 per cent year on year.

At a recent conference of the group, President and CEO Lê Mạnh Hùng required subsidiaries to continue with efforts to ensure safe and effective production, and keep close monitoring of the international market and macro-economic situation in order to make accurate forecasts serving production-business management in June and the remaining months of the year.

He added that besides the group’s own efforts, it would be necessary to improve the institutions, including the Law on Oil and Gas and related legal documents, to facilitate investment, production and business activities in the oil and gas sector. — VNS