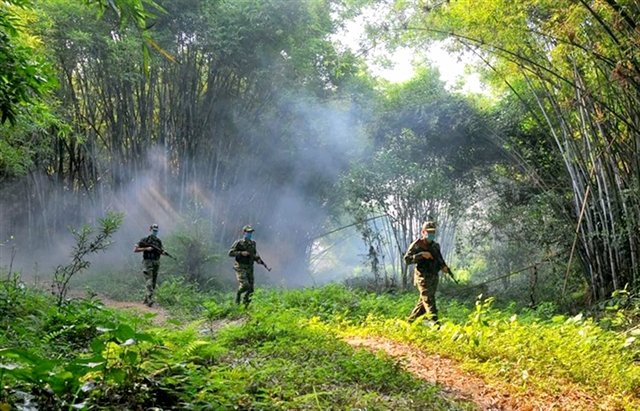 QUẢNG NINH  Border guards in the northeastern province of Quảng Ninh have been growing bamboo along the Ka Long river, which runs roughly along the border of the China-Việt Nam. Now, residents are taking up the initiative in upkeeping the bamboo, and turning a tidy profit.

The bamboo ramparts not only reinforce the riverbank and limit changes in the water flow, but also serves as the border between the two countries. Residents, particularly people of the Dao ethnic group, have been improving their income by selling bamboo shoots.

Senior Colonel Tạ Viết Phong, who has been at the Po Hen Border Guard Station since 1994, said he remembers that in rainy season the water from the upper part of the Ka Long River flew down, eroding many sections of the river bank.

When the embankment was built in the bank belonging to China, the Vietnamese side was more seriously eroded, he said.

Phong said he remembers a meeting in late February, 2000, where the then-head of the station, Bùi Giang Nam, and Politician Vương Ngọc Thực (who are now both retired) came up with the idea of ​​planting bamboo along the border river to prevent erosion, stabilise the water flow, and to define and manage the border more easily.

After the bamboo grew up well, it was handed over to the people to manage, care for and harvest bamboo shoots to improve their lives.

“The planting of trees will take many years, but if we don’t do it now, we will never reach the destination,” said Commander Nam.

Reaching an agreement on the initiative, the unit deducted money to buy Bát Độ bamboo varieties and called on people to dig more bamboo roots to plant.

The chiefs of Thán Phún and Pình Hồ Villages, Bắc Sơn Commune at that time were Nịnh A Bảo and Chỏng A Nhì, who were the most enthusiastic supporters of bamboo planting along the border riverbank.

Nhì recalled that at that time, border guards came to ask people to participate in bamboo planting along the Ka Long River.

“Phong and I visited villagers’ houses, calling on them to dig bamboo roots and plant them. To set an example, I also went to the forest to dig bamboo. The villagers saw that the village head and the Border Guard worked enthusiastically, so they followed,” Nhì said.

Phong said that people supported the bamboo growing idea, as those who directly live and work at the border are aware of the protection of sovereignty and border security.

People planted more bamboo by themselves to keep their garden land from being eroded by floods and to sell for profit.

Phong said that the bamboo trees were first planted in Bắc Sơn Commune and then expanded to commune of Hải Sơn.

Implementing the policy of the People’s Committee of Quảng Ninh province on a pilot programme on “Growing bamboo to protect the border”, the Provincial Border Guard Command coordinated with the People’s Committee of Móng Cái City to launch a bamboo planting project across the province. So far, nearly 2,000 bamboo trees have been planted along the bank of the Ka Long River. — VnExpress News