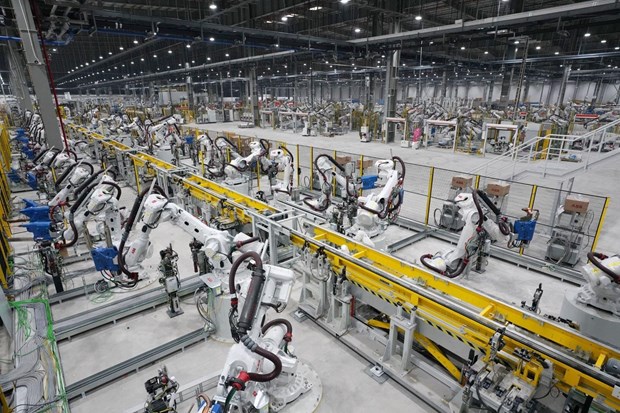 HÀ NỘI — Consumption in the automobile market is gradually recovering after a long period of social distancing in the country, but many domestic automobile manufacturers and assemblers are facing difficulties due to a shortage of spare parts.

At VinFast, for example, the manufacturer delivered only 40 VF e34 electric vehicles to its customers in January as some spare parts imported to Việt Nam arrived slower than planned. VinFast together with its partners is making efforts to solve difficulties in the supply of spare parts to speed up the handover of VF e34 cars to its customers in the near future.

According to a VinFast representative, the shortage of components is occurring globally, not only in Việt Nam. Therefore, domestic auto enterprises need to directly sign contracts with suppliers, or even look for new sources. In addition, automobile enterprises also need to share development plans with their partners so the latter can prepare appropriate plans to meet their demands.

Reports of the General Department of Customs showed in January 2022, automobile manufacturers and assemblers in Việt Nam spent US$395 million importing auto spare parts, down 7.8 per cent compared to the previous month.

Currently, most spare parts for auto companies are imported, so the global shortage greatly affects the domestic auto industry.

Though the domestic supporting industry has also seen certain growth, the developments are still not as expected. The country has so far had 21 enterprises that obtained certificates to participate in the production of components for the auto industry against five in 2017, but they have met only a very small part of the local demand.

Trương Thị Chí Bình, vice president and general secretary of the Vietnam Supporting Industries Association, said there are only 20-30 enterprises in the country qualified to produce auto components and the components cost 10-20 per cent higher than that of other countries in the region due to low output.

Therefore, according to experts, for the domestic auto industry to develop sustainably, the growth of the supporting industry is essential.

Nguyễn Trung Hiếu, a representative of Toyota Vietnam, said in order to cope with the shortage of auto spare parts, automobile manufacturers must increase the number of suppliers.

Automotive expert Nguyễn Minh Đồng said in order to encourage foreign enterprises to invest in the production of auto components, the Government needs to impose high taxes on components that are simple and easy to produce with small investment capital. As for complicated components, they should be exempt from tax to help auto manufacturers create products with reasonable prices.

In addition, it is necessary to give incentives on land rental and tax for 10 years for the supporting enterprises, Đồng said. — VnExpress News