Output, supplies, pricing of Vietnamese-produced molnupiravir to be decided this week 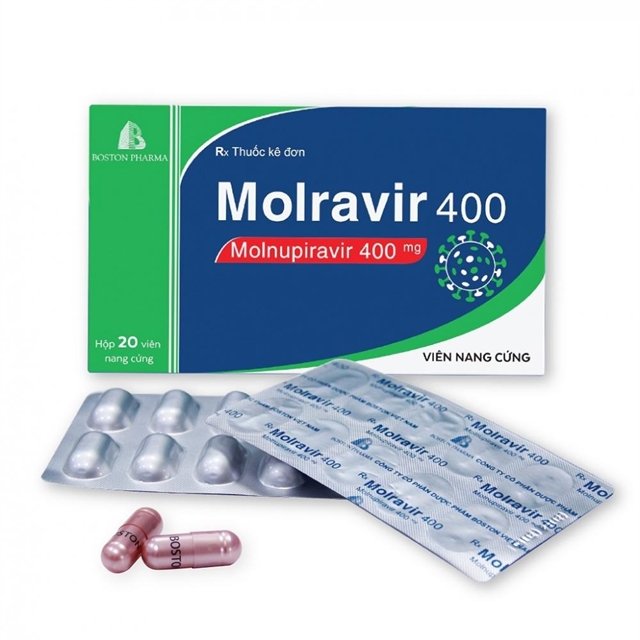 HÀ NỘI — The health ministry is set to meet this week with three Vietnamese producers of molnupiravir pills on the supplies, usage, quality and pricing of the antiviral drugs used to treat COVID-19.

Earlier on February 17, three products – Molravir 400mg produced by Boston Việt Nam Pharma (based in Bình Dương Province), Movinavir 200mg manufactured by Mekophar Chemical Pharmaceutical (based in HCM City), and Molnupiravir Stella 400mg produced by Stellapharm J.V Co., Ltd (Bình Dương Province) – were the first to be approved for conditional use in Việt Nam by the country’s drug administration.

The news was received positively as this was assumed to mean the drugs would be more readily accessible to the general public when the COVID-19 caseload in Việt Nam is climbing to new records in recent days, even with a high vaccination rate among the population aged 12 years and above.

Deputy health minister Đỗ Xuân Tuyên said mulnopiravir in principle was originally given emergency licence last year as the country started using the drugs under a pilot programme where local health facilities will be given the pills to distribute to COVID-19 patients under its care for free.

The health ministry will report to the Prime Minister asking for opinions on extending the usage of drugs beyond free administration at local health facilities, to make the drugs available at registered pharmacies so people could buy them more easily, as long as they have doctor’s prescriptions, Tuyên said.

Regarding the production capacity of the companies that have just been licensed to manufacture drugs containing the active ingredient Molnupiravir, experts said that it is still highly dependent on the supplies of raw materials and market demand, etc. but the output could reach up to dozens of millions of pills.

One in three manufacturers has reportedly received one tonne of ingredients since the end of December 2021 to prepare for the production of up to 4.75 million pills containing the active ingredient Molnupiravir.

This week, the three companies will declare their cost structure and pricing calculation method to the Drug Administration of Việt Nam, an important step for the drugs to be included in bidding procedures at medical facilities.

According to many sources from drug manufacturing companies, the expected selling price is just about VNĐ300,000 (US$13) per box of 20 400mg pills or 40 200mg pills, which is the equivalent of one course of treatment.

The price is lower than the recommended pricing for the drugs in developing countries at $19.90.

A representative of FPT Long Châu JSC, which owns the Long Châu pharmacy chain, said that it had signed a contract to distribute one million molnupiravir pills from Boston and Stellapharm.

It could start selling the drugs at nearly 500 pharmacies in 63 provinces and cities at the price recommended by the manufacturer starting this week.

Each patient can only buy one course, so that every COVID-19 patient has the opportunity to buy medicine, the representative said.

Molnupiravir is used to treat mild to moderate adult COVID-19 cases with at least one risk factor that could enhance the progression of the disease, according to the health ministry.

The recommended dosage is 800mg for every 12 hours over five days, and the medicines should be taken as soon as possible after a positive COVID-19 diagnosis and within five days of the symptoms appearing.

If they forget to take a pill 10 hours after the recommended dosage, they should take one as soon as possible and continue with the regimen. If the period is 10 hours, the patient should continue with the next scheduled pill, and not take double pills to ‘compensate’.

The safety and effectiveness of the drugs, when used for more than five days, has yet to be determined.

The health ministry urged people not to purchase molnupiravir drugs of unknown origin on the market.

While using Molnupiravir, if the COVID-19 patient encounters any adverse reactions, they should immediately notify their doctor or pharmacist for advice and timely treatment. — VnExpress News