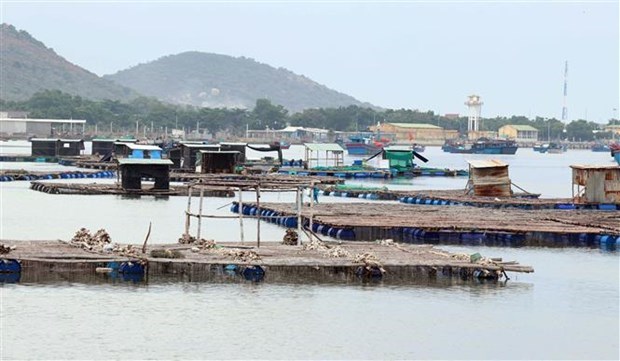 NINH THUẬN — The south-central province of Ninh Thuận plans to expand marine aquaculture models that are efficient and provide high incomes to farmers, according to its Fisheries Sub-department.

It will also expand the processing of ocean catches.

The aim is to develop marine aquaculture into a major pillar of its fisheries sector.

Đặng Văn Tín, head of the sub-department, said the province would expand breeding of high-value marine species like cobia, grouper, pomfret, oysters, and lobsters this year.

It would take advantage of its 106km coastline and large numbers of bays and lagoons for the purpose, he said.

It targets aquaculture output of 9,500 tonnes this year, he said.

To achieve the target, the sub-department and localities will instruct farmers to carry out aquaculture in zoned areas in seas and reorganise production to develop value chains.

The province will step up research into and commercial production of feedstock.

It will strictly regulate fishing to protect marine stocks and ensure sustainable development.

It will encourage farmers to switch from traditional floating cages near shore to modern offshore cages for aquaculture.

It encourages farmers to use advanced technologies for marine aquaculture such as using high-density polyethylene (HDPE) floating cages based on Norwegian methods.

Relevant agencies will teach farmers advanced techniques for marine aquaculture based on organic and biological standards to safeguard the environment and fisheries resources.

They will regularly monitor for diseases to instruct farmers in preventive measures.

The province will solicit investment in infrastructure for marine aquaculture.

They do so mostly near shore since they use traditional techniques and wooden cages which cannot resist strong winds and waves.