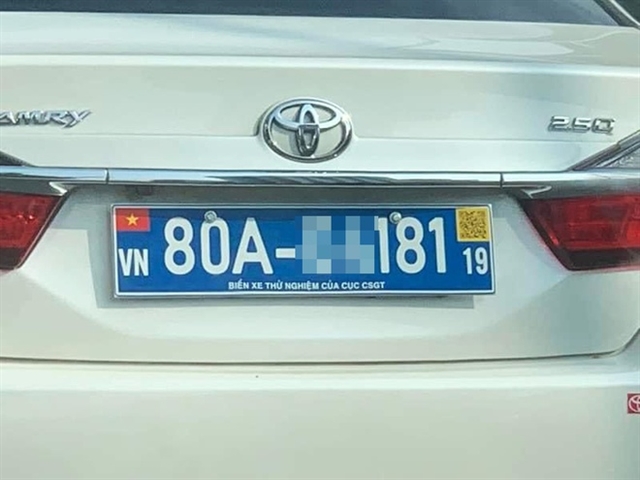 HÀ NỘI — The Ministry of Public Security’s Traffic Police Department is studying changes to the current car number-plate in an effort to stop drivers from covering their plates with tape to avoid traffic fines.

Colonel Đỗ Thanh Bình, the department’s deputy director, said possible changes included a new font and the addition of a QR code, the national flag and a symbol of the car’s year of production.

“With the new font, it will be very difficult for drivers to tape (the number plate),” he said.

The department is testing the new plate format in various environments and lighting conditions to see how they are seen by surveillance camera systems and human eyes.

Several days ago, pictures of a car with a new license plate format were posted on social websites. The trial licence plate had a rectangular shape and added the national flag, QR code and the number 19 as the year of the car manufacture at the two corners of the plate.

Bình said the vehicle’s year of manufacture would be likely to be included. For example, a car manufactured in 2021 would have the number 21 on its number plate.

The QR code would be integrated with information on the vehicle’s license plate in and be added to other information to support the police management process.

He confirmed that the new plan was in the research stage and would be publicized for approval from authorised agencies and the people before implementation. — VnExpress News