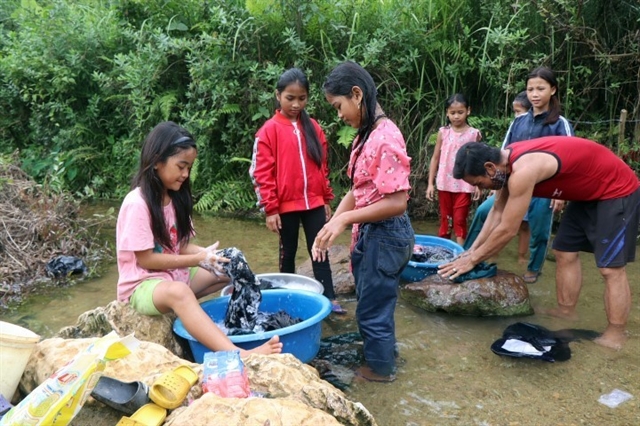 Local people in central Thừa Thiên-Huế Province’s Nam Đông District have to wash clothes in a pool of water near their houses due to water shortage. — VNA/VNS Photo

HÀ NỘI — The Ministry of Natural Resources and Environment (MoRE) has called on provinces and cities nationwide to increase the conservation of groundwater resources.

MoNRE said that many localities have been working to protect groundwater resources by limiting exploitation, filling in unused wells, and controlling drilling and exploration activities, which has helped prevent dropping groundwater levels, saltwater intrusion, and land subsidence in urban and delta areas, especially big cities like Hà Nội and HCM City, the Mekong Delta, and some coastal provinces.

However, it also pointed out that one of the main causes of land subsidence and groundwater pollution, degradation and exhaustion was a lack of attention to geological exploration, mineral mining and construction activities.

In its written request, the ministry asked provinces and cities to promptly order local agencies to deal with unused wells, especially those formed due to geological, mineral and construction surveys.

They were also told to promptly increase examination and monitoring at the grassroots level to promptly detect and handle land subsidence and groundwater pollution, degradation and exhaustion.

Groundwater was also the theme of this year’s World Water Day, which aimed to direct attention toward the hidden water resource that has always been critically important but not fully recognised in sustainable development policymaking.

The overarching message was that exploring, protecting and sustainably using groundwater will be central to surviving and adapting to climate change and meeting the needs of a growing population. — VNS