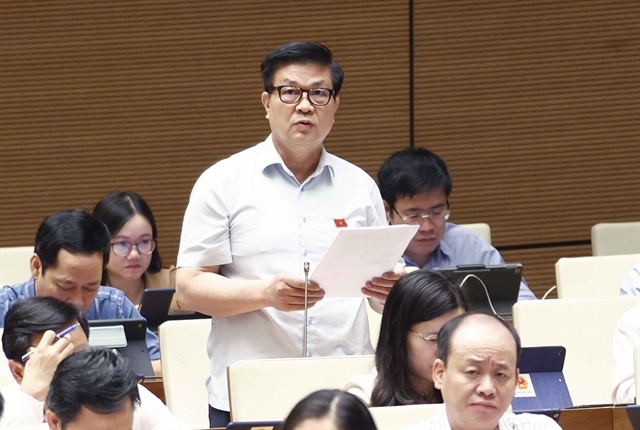 Deputy Nguyễn Văn An from Thái Bình Province said the draft law does not have clear environmental regulations, making it hard to implement and identify responsibilities in the case of incidents.

He suggested supplementing a regulation on examining and supervising oil and gas contracts and activities.

At the session, the deputies discussed a wide range of issues related to the bill, including its name, its coverage, measures to increase oil and gas reserves, and the diversification of new power sources.

Deputy Cầm Thị Mẫn from Thanh Hóa Province proposed having clear regulations to prevent an overlap with other related laws, such as the Investment Law, the Construction Law and the law on managing the use of State capital invested in an enterprise’s manufacturing.

Deputy Trần Hoàng Ngân from HCM City noted some achievements of the oil and gas sector, saying that the Việt Nam Oil and Gas Group has made important contributions to the State budget collection and the GDP. From 2006 to 2015, the sector contributed 20-25 per cent to the total State budget collection and GDP. Việt Nam ranked 33rd among 98 countries having crude oil reserves in 2021.

The draft revision to the Petroleum Law, comprising 11 chapters with 64 articles, aims to enhance the State management’s effectiveness and efficiency in the field.

After listening to the deputies’ ideas, Deputy Minister of Industry and Trade Đặng Hoàng An, on behalf of the bill compiling agency, delivered a report summarising the opinions and explaining a number of issues.

An also explained a number of issues related to oil and gas exploration, oil and gas contracts, incentives in oil and gas activities, State management in the field, as well as regulations on environmental protection, and supervision and investigation mechanisms.

Concluding the discussion, NA Deputy Chairman Nguyễn Đức Hải said that 23 legislators gave ideas on the bill, the majority of whom agreed on the necessity of the law in fully institutionalising the Party and State’s policies on developing the oil and gas sector, ensuring energy security, removing current problems in the field, synchronising the legal system and strengthening effectiveness and enforcement of State management over oil and gas.

Earlier the same day, the NA passed a resolution approving the 2020 State budget final accounts with 90.96 per cent voting in favour.