Economy bouncing back strongly but inflation cause for concern: cabinet meeting 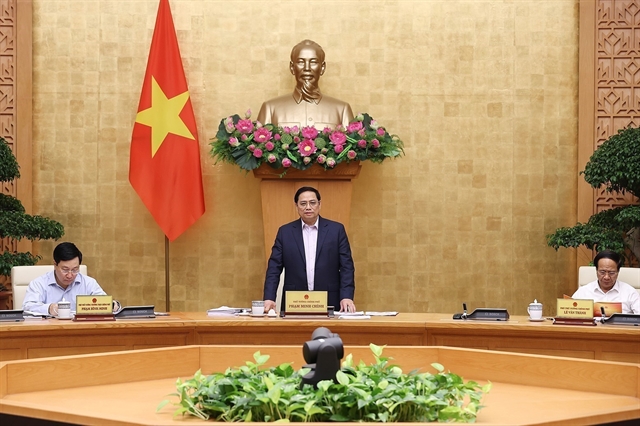 The Government delegates agreed that despite serious headwinds especially in the global affairs, Việt Nam in the first five months of 2022 witnessed positive improvements and the economy has been bouncing back robustly on all fronts – with most sectors recording growth compared to previous months and the same period last year, when the intense COVID-19 outbreak started to affect the country.

The five-month average Consumer Price Index (CPI), a strong indication of inflation level, rose only 2.25 percentage points compared to last year (which is still higher than the average of 1.29 per cent witnessed in 2021, but lower than the average in the 2017-2020 period), as most macro-economic indices remain stable and food, energy security ensured.

The implementation of stimulus policies has also achieved initial results, with preliminary statistics estimating that over VNĐ22 trillion ($948.6 million) out of the VNĐ301 trillion ($12.9 billion) package already disbursed, with the disbursement rate expected to speed up when the policies are thoroughly understood, popularised and implemented.

Foreign direct investment (FDI) in five months reached $7.71 billion, up 7.8 per cent, with green FDI on the upwards trajectory.

After the PM decided to set up Working Groups, the disbursement of public investment capital has largely increased – with realised capital from the State budget in the first five months of 2022 reaching VNĐ147.8 trillion, about 27.7 per cent of the plan and up 9.5 per cent over the same period last year.

Việt Nam’s recovery has been noted by the international community. According to the Nikkei assessment, Việt Nam had risen 48 places to 14th position in the ranking of the COVID-19 Recovery Index, while ADB and BIDV forecast that Việt Nam’s economy could grow by 5.5-6 per cent this year and the expansion rate will be certainly higher next year.

Regarding social security, in five months, the central Government and localities have expended nearly VNĐ81 trillion ($3.5 billion) to support 728,319 employers and over 49.52 million employees.

Việt Nam also successfully and safely held the 31st Southeast Asian Games (SEA Games) in May, demonstrating not only the country’s leading sports performance but also its reopening and post-pandemic recovery efforts.

PM Chính in the closing statement said the above-mentioned positive results are thanks to the timely and wise leadership and direction of the Party Central Committee, the Politburo and the Secretariat, headed by General Secretary Nguyễn Phú Trọng, as well as the supervision and assistance from the National Assembly, the resolute management of the Government, the participation of the whole political system and authorities at all levels, and the consensus and buy-in of the people and businesses, along with the help from international friends.

PM noted that one of the biggest challenges facing the economy right now is the risk of inflation due to rising costs of input materials – especially oil and gas, the unpredictable consequences of the Ukraine-Russia armed conflict, and other countries’ post-COVID policies.

The risks in financial and securities markets, as well as in real estate, must also be taken into account, the Government leader said.

Disbursement of public investment has not been significantly improved still, with livestock production and sea-based economic activities hit by soaring feed and fuel prices.

Life of many groups of people in the country remains difficult, especially in remote areas, ethnic minority-dominant areas, and people who are most affected by natural disasters and the pandemic.

All relevant State and Government bodies and agencies should focus on reviewing, supplementing and perfecting institutions, mechanisms and policies, promptly removing and proposing to resolve difficulties, especially in coordination with agencies of the National Assembly in addressing bottlenecks in planning, public investment, rapid recovery and sustainable development programmes, national target programmes, issues related to construction materials, forest land and rice land that many localities have shown concerns about, PM Chính said.

The recovery programme is a major, unprecedented stimulus package, and challenges are inevitable, but we must timely handle all arising problems.

The maintenance of macroeconomic stability, including controlling inflation and having a proactive and flexible monetary and fiscal policy will still be the priority in the future, he continued.

Regarding the crackdown on the financial and securities market, PM Chính said the capital markets must be developed in a healthy, sustainable, secure and effective manner.

All wrongdoers and violations will be strictly punished in accordance with the laws, but the rights and interests of legitimate businesspeople will be protected, he stated.

He also urged authorities to closely follow social issues of public concerns, such as rising costs of intuition fees and reportedly higher prices of textbooks, the quality and status of the history subject in general education – whether it would become an elective or still a mandatory subject, and the complicated developments of seasonal diseases like dengue, malaria, and hand-foot-mouth disease, along with emerging diseases like monkeypox and acute hepatitis in children. — VNS