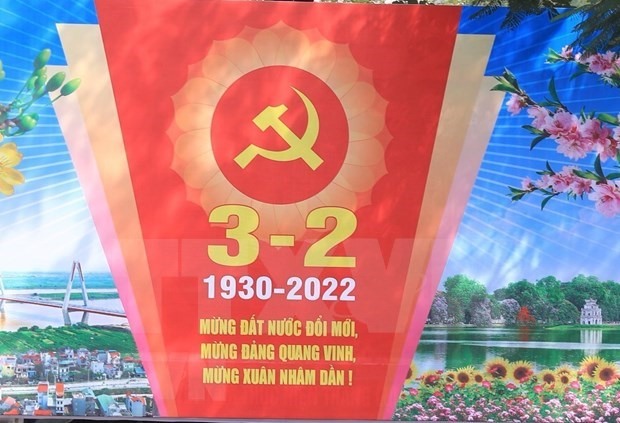 The Communist Party of Vietnam is celebrating its 92nd founding anniversary on February 3. VNA/VnExpress News Photo
HÀ NỘI — The Central Committees of the Lao People’s Revolutionary Party (LPRP) and the Cambodian People’s Party (CPP) have sent their greetings to the Central Committee of the Communist Party of Việt Nam (CPV) on its 92nd founding anniversary (February 3, 1930).
The LPRP and the people of races of Laos warmly congratulate the CPV and Vietnamese people on the great achievements and victories over the last 92 years, said the LPRP Central Committee in its message.

The Lao party said it feels proud to see the great friendship, solidarity and comprehensive partnership between the two Parties, States and peoples, nurtured and tested for decades, have been strengthened and expanded in various fields, bringing benefits to the two peoples, it said, adding the Party, State and people of Laos will do their utmost to preserve and further develop the bilateral ties for peace, friendship and cooperation in the region and the world.

In its message, the CPP Central Committee highly valued what the Party, State and people of Việt Nam have achieved over the recent time. It also expressed delight at the growing friendship, solidarity and comprehensive cooperation between the two sides.

It also pledged to further boost the Việt Nam-Cambodia relations in accordance to the motto “good neighbours, traditional friendship, and comprehensive and long-term partnership”.

The Cambodian party believes that under the leadership of the CPV, the Vietnamese people will achieve more and successfully accomplish goals set in the Resolution of the 13th National Party Congress, the message said.