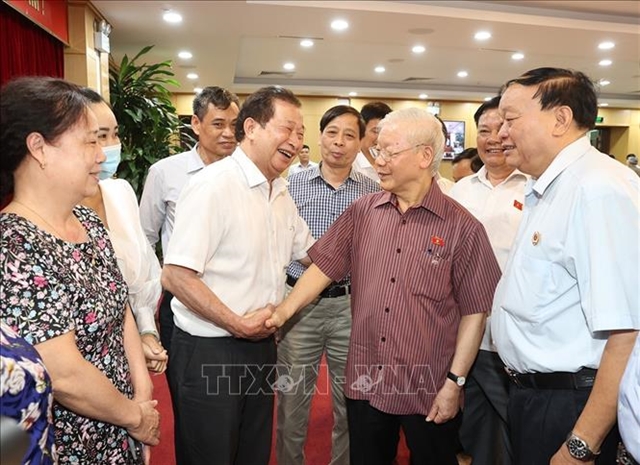 HÀ NỘI — Amendments to the Land Law and anti-corruption work were among issues discussed in a meeting between Party General Secretary Nguyễn Phú Trọng and voters in Hà Nội yesterday.

Before any session of the National Assembly in Việt Nam, deputies usually meet with voters. On Tuesday, Trọng met with voters in three districts of Đống Đa, Ba Đình and Hai Bà Trưng. The in-person meeting took place at the Đống Đa District People’s Committee Office and was broadcast to 56 other sites.

Such efforts helped detect and stop violators, including high-ranking officials, he said, adding that voters also applauded the establishment of the provincial steering committee on anti-corruption that was decided at the meeting of the Party Central Committee a few days ago.

“This is a very timely policy. The unity from the central level to the local governments would better prevent and detect violations,” Bách said, urging more investigations and strictly handling large corruption and economic cases, including cases involving large corporations.

The voter also said that the implementation of the 2013 Land Law revealed shortcomings, including many “loopholes” that create conditions for corruption in the land sector, causing losses of property of the State and the people and manipulation in the land market.

“The National Assembly deputies should pay attention to amending the Land Law,” he said. The bill on the amended Land Law should have been discussed at the third session of the 15th NA that will start on May 23, 2022. However, it was removed from the NA agenda as the Government proposed delaying the submission of the bill due to new issues that require more time to study, according to the NA Office’s announcement last month.

Voter Phùng Huy Đan of Trung Phụng Ward, Đống Đa District, also said that the NA should soon amend the Land Law so that land could be used for the right purposes and effectively, prevent corruption and negativity relating to land which caused concerns and frustration.

Party General Secretary Trọng responded that the land issue was among the priorities at the meeting of the Party Central Committee that wrapped up on Tuesday.

The Committee urged the National Assembly to study and consider amending the land law soon to maximise the potential and advantages of land.

“However, amendments to the law to promote its strengths are not simple,” he said.

He added it was necessary to study and summarise strategically, practically and continuously.

“The land issue needs to be done step by step and improved gradually,” he said.

Regarding the prevention of corruption and wrongdoing, Trọng emphasised that the Central Committee and the Politburo are determined in this task.

“There will be guidelines and regulations for implementation, especially in selecting personnel to promote efficiency at the Central Steering Committee,” he said.

“If a cadre who joins the anti-corruption steering committee is corrupt, who will fight against it? So, members of the committee, who violate the rules, will be strictly punished,” Trọng said.

Regarding the fight against negativity, according to the General Secretary, the focus is on fighting degradation in ideology, politics, morality and lifestyle that spoil people.

The Central Steering Committee on Anti-Corruption has performed well since it was established.

Many cadres, both incumbent and retired senior officials, and party secretaries of provinces had been disciplined and punished.

Recently, the Politburo also imposed collective discipline on the leaders of a province, including the secretary, deputy secretary, and chairman.

The Party leader suggested that Hà Nội pioneer in setting up a municipal steering committee on anti-corruption – the first of its kind in the country. — – VnExpress News