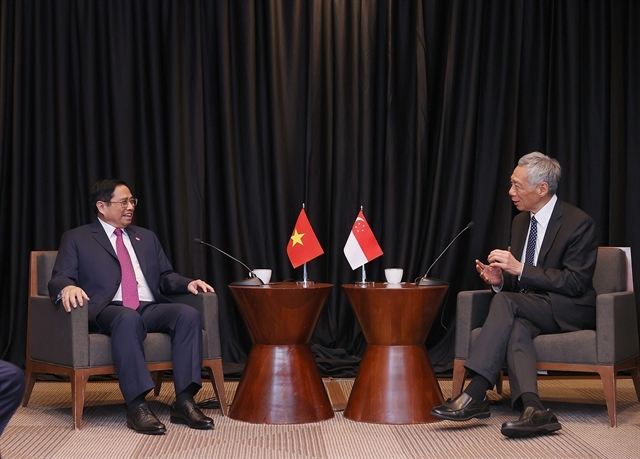 Vietnamese Prime Minister Phạm Minh Chính (left) and Singaporean counterpart Lee Hsien Loong had a meeting on May 12 (US time) as the two were in Washington DC for the US-ASEAN Summit. — VNA/- VnExpress News Photo Dương Giang

They met on May 12 (US time) ahead of the ASEAN-US Special Summit in the US.

The two Government leaders also reached consensus on continued cooperation in post-pandemic economic recovery and development, including in bolstering digital economy, green economy and circular economy, towards the 50th anniversary of the two countries’ diplomatic relationship and 10 years of their strategic partnership in 2023.

The two countries will further expand the chain of Việt Nam-Singapore Industrial Parks (VSIP) in Việt Nam and work together to make the best use of new-generation free trade agreements to which they both are members, such as the Comprehensive and Progressive Agreement for Trans-Pacific Partnership (CPTPP) and the Regional Comprehensive Economic Partnership (RCEP).

PM Chính congratulated Singapore on the selection of the leader of the ruling People’s Action Party (PAP) fourth-generation (4G) team, noting his belief that Singapore will continue with stable and prosperous development.

He underlined that Singapore is an important partner of Việt Nam and praised the contribution of various generations of Singapore leaders, including PM Lee Hsien Loong, to the cooperative ties between the two countries.

The Singaporean PM affirmed that Singapore attaches importance to and wants to develop its strategic partnership with Việt Nam in both bilateral and multilateral frameworks.

The two Government leaders expressed satisfaction at the rapid and strong progress in the partnership, with economic collaboration continuing to be a bright example of cooperation and connectivity in the region.

Singapore has recently become the second largest foreign investor in Việt Nam with total registered capital exceeding US$67.5 billion. The VSIPs have operated effectively over the past 20 years, contributing to their strategic partnership. Cooperation in defence-security, culture, education and people-to-people exchanges help maintain robust development.

The two PMs used the occasion to exchange views on regional and global issues of mutual concern, including existing cooperative mechanisms and new initiatives on economic cooperation in the region.