Goods congestion at border gates needs to be solved before Tết: Deputy PM 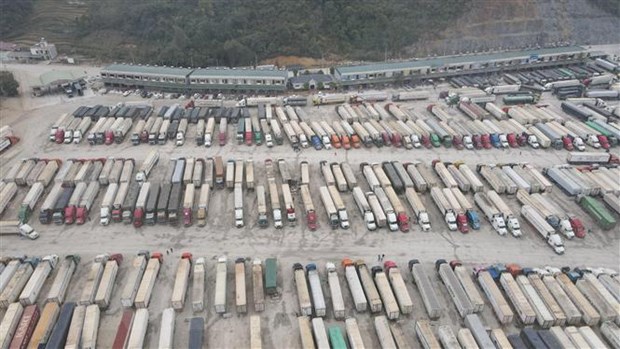 The Deputy Prime Minister emphasised this task at an online meeting on January 8 between the Government and localities to solve goods still congested at the northern border gates.

This is the second urgent meeting of the Government within 10 days to deal with this situation.

In the past few days, the agencies of the two countries worked closely to open more border gates and increase the working hours for customs clearance of goods.

Local authorities also provided information about goods congestion at the border gates and advised firms to not transport more goods to those sites.

However, the number of trucks congested at the border gates is still high. There are still many trucks from other localities travelling to border gates.

The decrease in the number of trucks was mainly thanks to domestic consumption, and also partly to official exports via Hữu Nghị Border Gate, as well as to exports by sea.

According to Lạng Sơn Province’s authorities, after the previous meeting with Deputy Prime Minister Lê Văn Thành, Lạng Sơn Province has requested authorities of other localities nationwide to coordinate in controlling agricultural products exported via its border gates.

Lạng Sơn has also recommended commodity associations, businesses and individuals to temporarily stop transporting goods to the border gates, and at the same time have a plan on promoting domestic consumption and post-harvest processing.

As of the morning of January 8, there were 1,921 goods trucks at the border gates in this province, including 919 trucks transporting fruit.

In the coming days, the Deputy Prime Minister asked the ministries of Industry and Trade, Agriculture and Rural Development, Foreign Affairs, and Finance, customs, authorities of border localities to continue working with Chinese counterparts to create more favourable conditions for customs clearance of goods that are congested at border gates, including an increase of working hours for customs clearance and the number of border gates under operation.

The Deputy Prime Minister asked the Ministry of Agriculture and Rural Development to continuously coordinate with localities, associations and businesses in promoting the processing of agricultural products.

The Ministry of Industry and Trade needs to implement solutions to expand markets and promote domestic consumption, especially via the system of supermarkets, trade centres and traditional markets.

Ministries and sectors, including the railway and maritime sectors, should have measures to promote official exportation and limit unofficial exports.

China has announced the reopening of Pingmeng border gate with Việt Nam’s Sóc Giang border gate in Cao Bằng Province from 10:00 on January 7.

The border gate was reopened just one day after the first meeting of the Working Group on Việt Nam-China Trade Facilitation, the Vietnamese Ministry of Industry and Trade’s Asia-Africa Market Department said.

Previous VN-Index bounces back with stimulus package approved
Next Update of COVID-19 new cases in Việt Nam on Jan. 12 afternoon