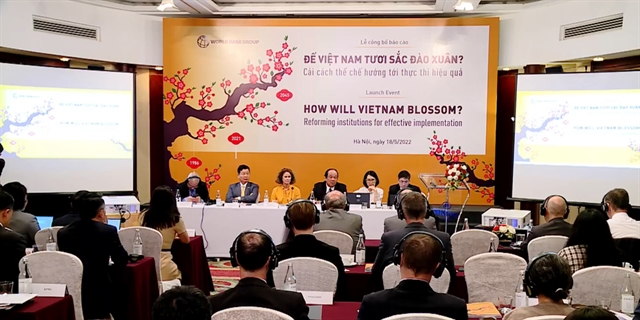 Speakers at a conference discuss how improving institutional performance can help Việt Nam achieve its target of reaching high-income status in 2045. — VNA/VNS Photo

The key to addressing said issues, according to WB, is for the country’s institutions to adapt and improve.

“Việt Nam’s GDP per capita has increased fivefold over the past three decades, while its institutions have not adapted at the same speed since the Đổi Mới (Renewal) course of the late 1980s,” said World Bank Country Director for Việt Nam Carolyn Turk. “A series of institutional reforms can help the country avoid the middle-income trap by increasing its efficiency to respond to new and complex global and domestic challenges.”

The report said in the last 35 years, Việt Nam has implemented its development priorities unevenly. While it has exceeded expectations in trade openness and social inclusion, the country has lagged behind considerably in promoting green growth and upgrading its national core infrastructure.

Such differences were explained by the lack of its institutions’ preparedness to address increasingly complex, often cross-cutting development priorities, or to facilitate the transition to a higher-income society. Adaptive and modern institutions is, therefore, a key priority in Việt Nam’s socio-economic development strategy adopted by the National Party Congress in February 2021.

The report said in order to improve performance, Việt Nam must create a solid institutional anchor that will transform development priorities into concrete actions; streamline administrative processes to increase the effectiveness of government at all levels; use market-based instruments to motivate public and private stakeholders; enforce rules and regulations to enhance motivation, trust, and fairness; and engage in participatory processes to secure greater transparency and accountability.

The only way forward is to adopt and implement bold reforms on a large scale to realise Việt Nam’s vision for economic development and to strengthen the capacity to implement national strategies, especially in key areas including green growth, digital transformation, financial inclusion, social protection and infrastructure upgrades.

Failing to carry out the said above reforms, Việt Nam would find itself at risk of falling into a middle-income institutional trap.

According to the report, the country has shown signs of willingness to adopt such reforms in recent years as the Ministry of Internal Affairs is currently preparing the next master plan of administrative reforms that might go beyond the traditional gradual approach used so far.

The objective is to streamline the central government by trimming ministries, with a specific focus on the performance of several particular ministries whose responsibilities overlap with each other in their fields, such as the transport and construction sectors, finance and planning and investment, according to former Minister and Chairman of the Office of the Prime Minister.

The report advised institutions to employ a new approach to identifying policy objectives, which traditionally has been about finding the balance between institutional stability and adaptability. In light of recent changes in the global context and increasing pressure from the economy to improve efficiency, the recommended approach must focus more on adaptability to cope with new challenges of a post-pandemic world and to implement development priorities faster and better. VNS