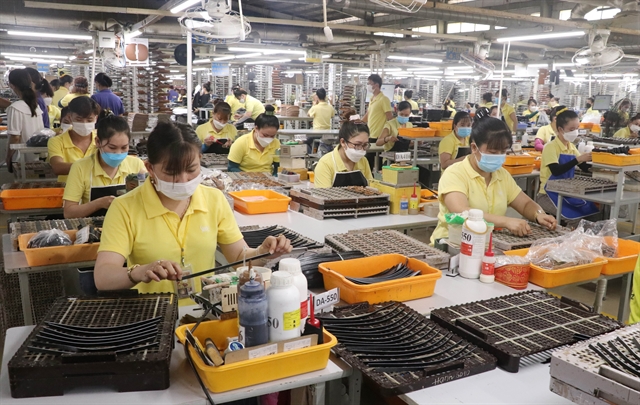 A factory in Long An Province.  — VNA/VNS Photo Bùi Giang

HÀ NỘI — The index of industrial production (IIP) in the first five months of 2022 increased by 8.3 per cent over the same period last year, according to the General Statistics Office (GSO).

The IIP in May also surged 4 per cent month-on-month, and 10.4 per cent year-on-year, the GSO said, adding that the processing and manufacturing industry saw a yearly IIP rise of 12 per cent.

During the five months, the IIP growth of the processing and manufacturing industry stood at 9.2 per cent, while that of the electricity generation and distribution and mining industry reached 5.5 per cent and 4.1 per cent, respectively.

The GSO also named major industrial products with strong IIP increases such as telephone components with 21.6 per cent, urea fertiliser (18 per cent); clean coal (13.4 per cent); processed seafood (11.4 per cent) and automobiles (10.3 per cent).

Industrial production continued its recovery following the successful containment of COVID-19 throughout the country, it said, adding that the IIP rose in 61 out of 63 provinces and cities, with strong growth seen in Bắc Giang (46 per cent); Hà Giang (26 per cent); Bình Phước (23 per cent); Quảng Nam (22 per cent); Bắc Ninh (20 per cent) and Thanh Hóa (17.3 per cent).

As of May 1, the number of employees working in industrial enterprises rose 1.4 per cent over the previous month and 4.4 per cent compared to the same month last year.

The number of employees in State-owned enterprises decreased 4.5 per cent year-on-year, while those in non-State firms slumped 1 per cent, and those in foreign-invested businesses increased by 6 per cent. — VNS