HCM City to focus on One Commune One Product development 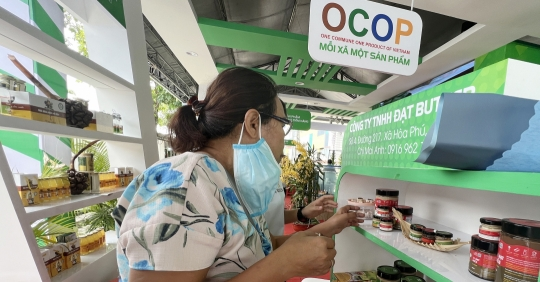 A customer looks at products made under the One Commune One Product programme in an exhibition on exemplary agriculture products in HCM City. – Photo nongnghiep.vn

HCM CITY — HCM City plans to focus on the One Commune One Product programme and develop more products under it, its officials have said.

One Commune One Product (OCOP) is a national programme that seeks to facilitate the development of regional agricultural specialties and rural tourism.

HCM City has 27 OCOP-certified products, 21 of them ‘four-star’, signifying their potential to reach international standards.

The city targets 41 more getting OCOP designation this year, including 19 four-star products.

The Department of Agriculture and Rural Development has recently submitted an OCOP programme plan for until 2025 to city authorities for approval, which will allow businesses all over the city to take part in the programme unlike now when only those in its five outlying districts can.

Đinh Minh Hiệp, director of the department, said the city had been slow in developing OCOP compared to many provinces.

The department wants the city to roll out more policies to facilitate investment in agriculture and offer favourable loans to businesses developing OCOP products.

It also plans to work with supermarkets to allocate OCOP product sections and with Mekong Delta and Central Highland provinces to promote tourism and introduce the city’s OCOP products to tourists.  VNS