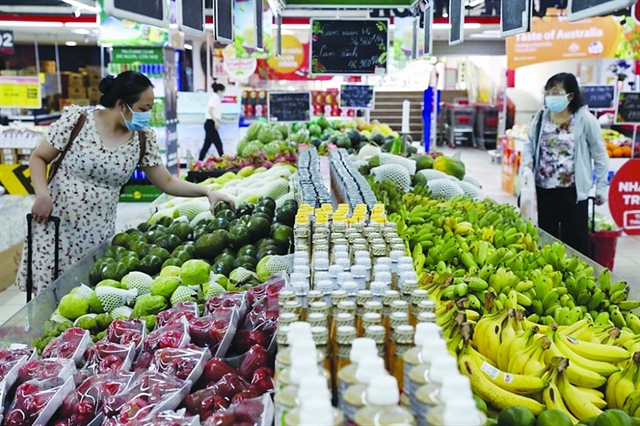 To control inflation below 4 per cent as set by the National Assembly, it was necessary to reduce cost-push impacts, increase the supply of goods and prevent inflationary psychology. — VNA/VnExpress News Photo

HÀ NỘI — Fiscal policies have worked to promote economic growth and control inflation in the first months of this year, Deputy Minister of Finance Võ Thành Hưng said, adding that close watch would be placed on the market to ensure inflation was within the National Assembly’s target.

Hưng pointed out that the rapid increases in global commodities prices from the beginning of this year significantly affected the domestic market with skyrocketing food and raw material prices.

US inflation surged to a new four-decade high of 8.5 per cent in March from the same time a year ago, driven by skyrocketing energy and food prices.

In Việt Nam, inflation averaged 1.92 per cent in the first quarter, a moderate increase, Hưng said, adding that fiscal policies focused on reducing taxes and fees to support the economy worked to control inflation.

Hưng pointed out that the taxes and fees reduced in 2022 would total around VNĐ88-90 trillion.

He added that the ministry was going to propose a Government extension of three, six and nine months to pay land fees and taxes estimated at around VNĐ135 trillion to support enterprises.

To control inflation below four per cent as set by the National Assembly, it was necessary to reduce cost-push impacts, increase the supply of goods and prevent inflationary psychology, Hưng said.

A close watch would be placed on the market developments, especially on necessary goods and services, to timely raise appropriate policies.

It is also important to promote products to increase the supply of goods in the domestic market and ensure market circulation.

According to Nguyễn Minh Cường from the Asian Development Bank (ADB), Việt Nam’s inflation will remain under 4 per cent, adding that the Vietnamese Government’s ability to control prices remained flexible, such as reducing environmental protection tax on fuel.

Throughout 2022, the biggest risk to inflation is external factors. From 2023, when the economy recovers, the increase in domestic demand would weigh on inflation.

Meanwhile, Standard Chartered recently forecast Việt Nam’s inflation this year to exceed the expected rate of 4 per cent and even climb higher in the following years. — VnExpress News