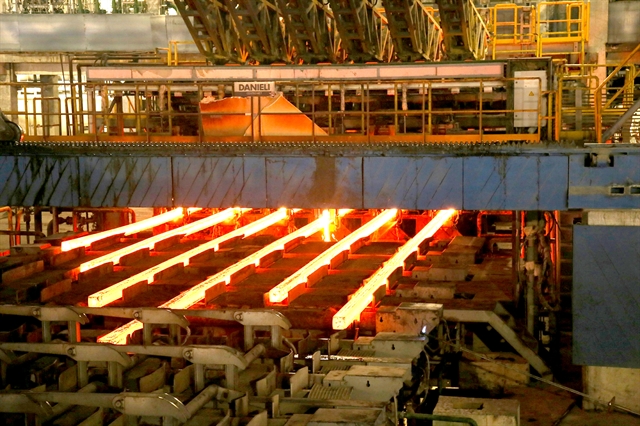 HÀ NỘI — The Board of Directors of Hòa Phát Group (HoSE: HPG) has approved the 2021 dividend payment of 35 per cent, of which 5 per cent is paid in cash with each share receiving VNĐ500.

With 4.47 billion shares outstanding, the company will have to spend VNĐ2.2 trillion (US$94.9 million).

The steel producer will also issue an additional 1.34 billion shares to pay the remaining dividend.

The source of capital is taken from the retained profit after tax on last year’s audited financial statements. The issuance date is expected from June to August of this year.

The total value at par value is VNĐ13.4 trillion, thereby increasing the charter capital of the company to over VNĐ58.1 trillion.

Chairman Trần Đình Long and his family members are holding 1.56 billion HPG shares, which account for 47.25 per cent of the company’s capital. Therefore, after the dividend payment, Long and his family can receive about VNĐ784 billion in cash and 737 million shares.

According to data shared by the chairman at the company’s 2022 General Shareholders Meeting, the number of shareholders of Hoà Phát at the time of finalising the meeting list at the beginning of April was 161,000 people, the highest amount on the country’s stock market.

Statistics from the Hồ Chí Minh Stock Exchange (HoSE) also show that HPG was the ticker symbol with the largest trading value in 2021 after reaching nearly VNĐ336.3 trillion, accounting for 7.7 per cent of the bourse’s total amount.

At this year’s annual meeting of shareholders, many shareholders had proposed to increase the 2021 dividend to 40 per cent, of which 10 per cent is paid in cash and 30 per cent in shares.

However, Phạm Thị Kim Oanh, Chief Financial Officer of Hòa Phát Group, said that the undistributed profit after tax on the holding company’s financial statement was more than VNĐ17 trillion in 2021, corresponding to the maximum dividend rate of 38 per cent. Its holding company’s capital is too low compared to its subsidiaries. Therefore, the maximum dividend rate is 35 per cent, of which 5 per cent is in cash.

In the first quarter, the steel producer recorded revenue of VNĐ44.4 trillion, up 41 per cent year-on-year, resulting in profit after tax of VNĐ8.2 trillion, a gain of 17 per cent. Production of iron and steel products contributed 90 per cent of the overall results.

Addressing the comments regarding the company’s gloomy outlook, Long said that shareholders will see the difficulties of the steel industry after the business results of the second, and third quarter, and the whole year, so the company leaders must set cautious goals. This year’s plan is considered challenging.

However, in the long term, the chairman who is also the largest company shareholder is confident that Hòa Phát will continue to advance.

On the stock market, HPG shares extended their recent rallies on Monday with a gain of 0.28 per cent to trade at VNĐ35,550 a share at 13:19 local time, down nearly 24 per cent compared to the beginning of the year. — VNS