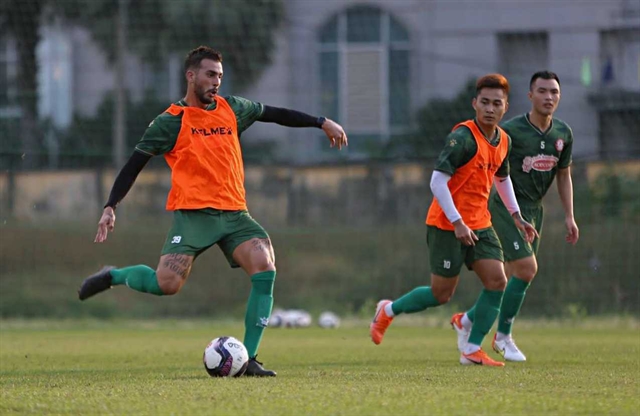 Cosendey will wear the jersey No 10 and is expected to replace Lee Nguyễn after Nguyễn’s contract with HCM City expired in December 2021.

During the time playing for HCM City, Nguyễn scored five goals in nine appearances. He returned to the US last August and then trained the Washington Spirit women’s club. Currently, Nguyễn is studying for a professional coach degree in the US.

Cosendey was born in 1997 and stands 1.86m tall. He holds dual citizenship, Brazil and Portugal, and played for Vasco da Gama in Rio de Janeiro.

In the 2021 season, he played two matches for the Santo Andre team in the Paulistao A1 tournament.

According to the transfermartk.com, Cosendey’s value is 150,000 euros. Compared to the previous seasons, HCM City have not spent as much this time around.

Cosendey is quite young and that is also an advantage for newly-appointed coach Trần Minh Chiến of HCM City who likes to use young players. Pinto will have one season to prove himself.

Cosendey has already started training with HCM City and says he is very motivated and looking forward to making his debut and feel good physically.

In the middle of January, the squad will have friendly matches against Sông Lam Nghệ An and Bình Định to test their line-up. Earlier, the team cancelled several friendly matches because some of their members were infected with coronavirus.

HCM City are also looking for a foreign striker for the 2022 season and are tipped to sign another Brazilian player. — VnExpress News