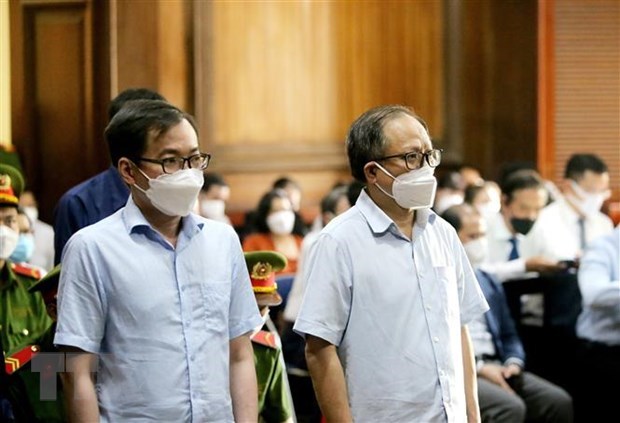 HCM CITY — The People’s Court of HCM City on January 8 sentenced Tất Thành Cang, former Deputy Secretary of the municipal Party Committee, to 10 years in prison on the charge of “violating regulations on the management and use of State assets, causing losses and wastefulness”.

According to the indictment, Cang, Phạm Văn Thông (former Deputy Chief of the Office of the municipal Party Committee), and some other defendants holing key leadership positions of HCM City, the Tân Thuận Industrial Promotion Co. Ltd (IPC), and the South Saigon Development JSC (SADECO) were assigned to manage the State’s assets and carry out the State’s regulations on the presentation of State capital at enterprises.

However, driven by different motives and purposes, under Cang’s leadership and decision-making role, the defendants committed an array of violations in the transfer of nine million shares of SADECO to the Nguyễn Kim company without bidding and assessment by an organisation specialised in price appraisal.

Those wrongdoings led to losses of over VNĐ669.6 billion (US$29.5 million) to the State.

Tề Trí Dũng (former General Director of the IPC and former Chairman of the Board of Directors of SADECO), Hồ Thị Thanh Phúc (former General Director of SADECO), and their accomplices abused their authority in managing remuneration and rewards at SADECO to make deceits to illegally spend the money that this company should have paid to the municipal Party Committee’s Office and the IPC. They appropriated more than VNĐ4.6 billion.

Dũng also ordered Phúc and other accessories to spend SADECO’s money on foreign trips by many individuals in the name of “fact-finding tours”, causing losses of over VNĐ2.1 billion to the State.

At the January 8 session, Dũng received a jail term of 20 years while Phúc was jailed for 16 years. Both were charged with “embezzlement” and “violations in the management and use of State-owned property that led to losses or wastefulness.”

Seventeen others involved in the case got two- and three-year suspended sentences and jail sentences between three and 13 years. — VnExpress News