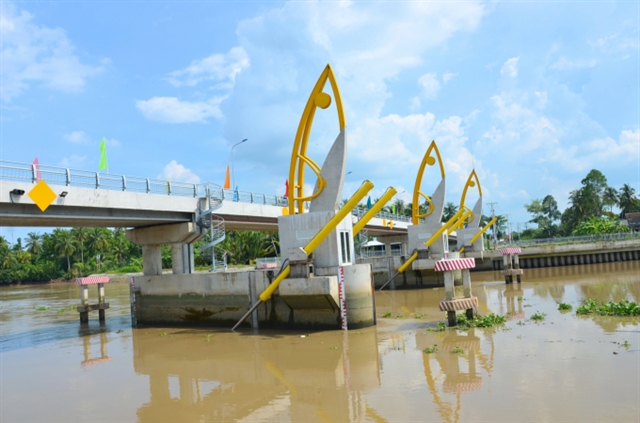 Vũng Liêm sluice gate in southern Vĩnh Long Province is one of the most advanced salt-water control works in Việt Nam. —Photo nongnghiep.vn

HÀ NỘI — The Ministry of Agriculture and Rural Development has issued a directive on the implementation of solutions to cope with drought and saltwater intrusion in the Mekong Delta, which is forecast to be harsh in the coming dry season.

2022 is forecast to be a year of water shortage in the Mekong River basin.

Reports from the ministry show that the flood water in the Mekong River Delta is currently at approximately the average level of many years.

Tonle Sap in Cambodia, an important source of additional water for the Mekong Delta in the dry season, is now at a level lower than the average of many years in the same period of about three billion cubic metres.

The average total water storage capacity of upstream hydropower reservoirs is currently at 80 per cent of design capacity.

The ministry said it was likely that reservoirs upstream would limit water discharge during the first months of this dry season.

Therefore, the flow on the main part of the Mekong River would decrease rapidly. The amount of water entering the Mekong Delta in the first months of the dry season in 2021-22 was likely to be lower than the average level and change according to the operation of hydropower reservoirs upstream.

Saltwater intrusion in this dry season was likely to be higher than the average level, affecting the operation and collection of water for agricultural production and people’s livelihoods.

In order to proactively implement solutions to prevent and combat drought and saltwater intrusion, the ministry has requested the People’s Committee of localities in the Mekong Delta to urgently monitor the development of the hydrometeorological forecasts and saline intrusion.

Localities have been asked to develop scenarios and reaction plans to prevent and control drought and saltwater intrusion in line with the actual situation in each locality, including plans to cope with extreme saline intrusion as happened in the years of 2015-16 and 2019-20.

Localities need to zone out areas likely to be affected by saltwater intrusion to direct and deploy appropriate response solutions. These areas would be given priority to get water supply for people’s daily life, livestock farming and crops of high economic value in case of drought or saltwater intrusion.

Localities have also been required to zone out fruit trees at risk of being affected by saline intrusion and quickly calculate and balance water sources, strengthen the construction of dispersed water ponds to ensure enough water to maintain the development of trees.

In addition, local authorities must focus on arranging suitable crop structure, speeding up early sowing of winter-spring crops in coastal areas in order to limit the influence of saline intrusion. Aromatic, high-quality rice varieties with short growing time and varieties tolerant to salt water should be used.

They have also been asked to dredge canals, dig ponds and wells and build temporary dams to store fresh water in emergency situations. The ongoing construction progress of irrigation work, domestic water supply, and especially work to keep fresh water, control salinity, canal systems, water pipelines in high-risk areas must be completed as soon as possible.

Localities will be in charge of monitoring saline intrusion in at-risk areas and promptly informing people.

The ministry has suggested localities allocate local budgets and other capital sources to deploy urgent solutions to prevent and combat drought and saltwater intrusion. — VnExpress News