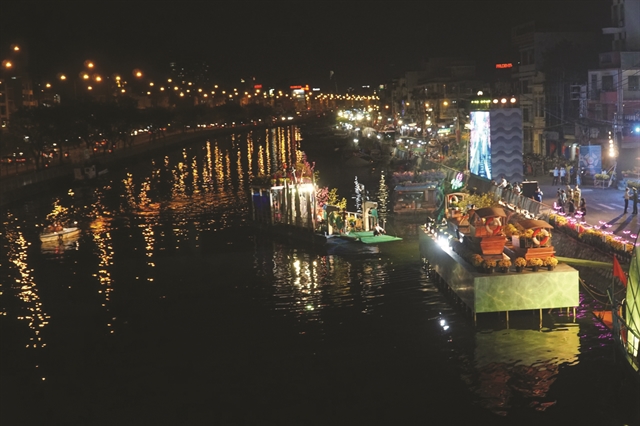 The HCM City’s first “Trên Bến Dưới Thuyền” (On the Wharf – In the Boat) Fruit Festival will be held at the Bình Đông Wharf in District 8 from May 28 to June 4. VNA/VNS Photo by Thu Hương

HCM CITY — The first floating fruit festival organised by HCM City next week will present specialty fruits from the southern region in a cultural milieu including folk music and dance.

The “Trên Bến Dưới Thuyền” (On the Wharf – In the Boat) festival will be held at the Bình Đông Wharf in District 8 from May 28 to June 4.

The event aims to honour the agricultural values of Việt Nam and the southern region, particularly promoting special kinds of fruit grown in the region among locals and foreign visitors.

The festival will include 180 stalls and boats displaying more than 150 kinds of fruit that meet VietGap and Global Gap standards, and a giant and rare fruit collection from the Cửu Long (Mekong) Delta provinces of Vĩnh Long and Bến Tre.

It will also present different kinds of fruit-based drinks and food produced by local firms.

There will be performances of tài tử music and lion dragon dances, too.

According to the organisers, the festival will support local farmers in Cửu Long Delta by promoting their produce, in particular some special Vietnamese fruit varieties.

The organisers also expect the festival to become one of the city’s annual cultural events along the Sài Gòn River.

The festival’s opening ceremony will be held at 8am at the wharf on Nguyễn Văn Của Street.

Among the specialty fruit that the festival will showcase are: the Cái Mơn durian, Cần Thơ rambutan, Hòa Lộc mango, Năm Roi grapefruit, An Phước plum, and Tân Quy mangosteen will be available for visitors to taste and buy at 20-30 per cent below market prices.

Other exciting features will include a floating fruit market, a safe fruit contest, fruit carving demonstrations, a fruit parade, a giant fruit and vegetable exhibition, and an exhibition of rare aquatic and tropical creatures. — VNS