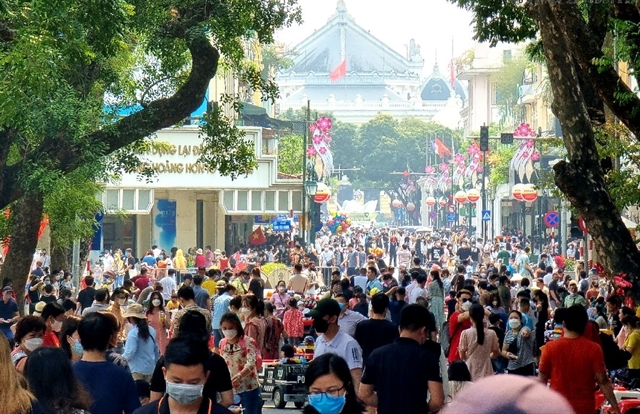 Walking streets around Hoàn Kiếm Lake are often full of people at the weekend. — VNA/VNS Photo

Under the decision issued by the municipal People’s Committee on regulations about the operation of the pedestrian areas, people will not be allowed to take their pets to the region, except when getting permission from authorities.

Organisations and individuals will not be allowed to park vehicles in the area, except for wheelchairs of people with disabilities and cars of officers on duty, such as for ensuring public order and security, fire fighting and waste collection.

Illegal gatherings and marches, gambling, motorbike/car racing, and activities causing public disorder will not be allowed.

The ban is also applied to swimming and fishing in Hoàn Kiếm Lake.

Vendors are prohibited from the pedestrian areas.

People must get permission when using speakers, radios and drums on pedestrian streets around Hoàn Kiếm Lake.

The organisation of art performance activities in the walking areas must be reported to local authorities at least five days ahead.

Individuals and organisations doing business in the walking zone must be licensed and are allowed to trade products in line with trade, services and tourism plans approved by Hà Nội authorities.

Shops have to publicise their service prices and are banned from inviting customers with insistence or overcharging them.

Hà Nội authorities sought opinions from the public on the regulations for the Hoàn Kiếm pedestrian area management in September 2020.

Pedestrian streets around Hoàn Kiếm Lake have been reopened since March 18 following a lengthy suspension due to the pandemic. The pedestrian area is open from 7pm on Friday until late Sunday every week. — VNS