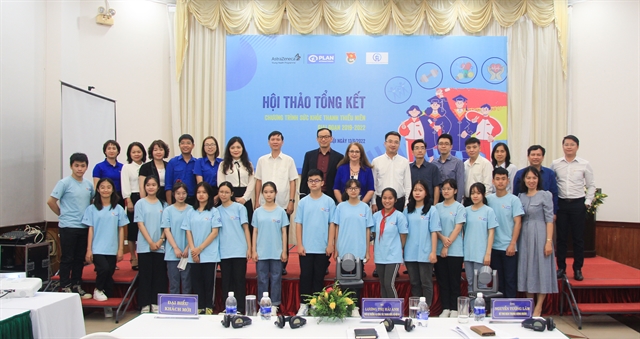 Thousands of young Vietnamese people have been equipped with knowledge about risky behaviors and prevention of non-communicable diseases through the Young Health Programme in Việt Nam. — Photo courtesy of AstraZeneca

HCM CITY — More than 49,300 young Vietnamese have learned about risky behaviours and preventive measures associated with non-communicable diseases (NCDs), thanks to three years of instruction from the Young Health Programme (YHP).

AstraZeneca Việt Nam and Plan International Việt Nam on June 13 organised a seminar to reflect on the progress and achievements of the programme in the 2019-2022 period, along with their two partners the National Youth Centre and Hà Nội Centre for Disease Control.

YHP is AstraZeneca’s global disease prevention programme, focusing on young people aged 10 to 24 living in vulnerable environments and under-resourced settings around the world.

It aims to prevent the most common NCDs, such as cancer, diabetes, heart disease, respiratory disease and mental illness.

Since its launch in 2010, the YHP has reached more than 30 countries and 40 million youth with information about risky behaviours associated with NCDs.

It has gained international recognition and has won several prestigious awards including the 2018 Ethical Corporation Community Investment of the Year.

With a total investment of 750,000 GBP (VNĐ20.9 billion), YHP in Việt Nam has been implemented in Hà Nội’s Hai Bà Trưng and Đông Anh districts.

It focuses on addressing the primary NCD risk factors of tobacco and alcohol use, physical inactivity, poor diet and air pollution, as well as supporting the broader health and rights of young people.

After three years of successful implementation, it has accomplished all of its key goals and has had an important impact on the targeted populations.

Young Vietnamese people in schools, universities and industrial zones have been equipped with knowledge through more than 1,000 creative contests, discussions, and group activities, which were carried out by 538 peer educators.

Nearly 100 training courses have been organised on knowledge of NCDs and soft skills for young people, their parents and community leaders to improve their skills as peer educators.

Nguyễn Tường Lâm, secretary of the Central Committee of the Hồ Chí Minh Communist Youth Union and Standing Vice Chairman of the National Committee for Youth in Việt Nam, appreciated the support of Plan International Việt Nam and AstraZeneca during the last three years.

“The joint collaboration has improved the physical and mental health of Vietnamese youth”, he said.

Key content about NCD prevention has been integrated into the latest Việt Nam Youth Development Strategy 2021-30 and other key policy documents thanks partly to the programme’s efforts.

“The programme supports young people to raise awareness and knowledge on how to prevent NCDs such as a healthy diet, increasing physical activity and preventing alcohol consumption and smoking”, said Sharon Kane, Country Director of Plan International in Việt Nam.

“Young people have the power to create a healthier, more sustainable world. Through YHP, we empower them to be their own health advocates,” he said.

The company is exploring the opportunity to continue to support the next phase of YHP in the country.

Based in UK, AstraZeneca is a global, science-led biopharmaceutical company that focuses on the discovery, development, and commercialization of prescription medicines in oncology, rare diseases and biopharmaceuticals.

It operates in over 100 countries and its innovative medicines are used by millions of patients worldwide.

Plan International is a non-governmental, non-religious, non-profit organisation working for a brighter future for children.

It has been operating in Việt Nam since 1993, with the goal of helping children and young people, especially disadvantaged groups and girls, so they can grow up in a safe and secure society which respects their rights. — VNS