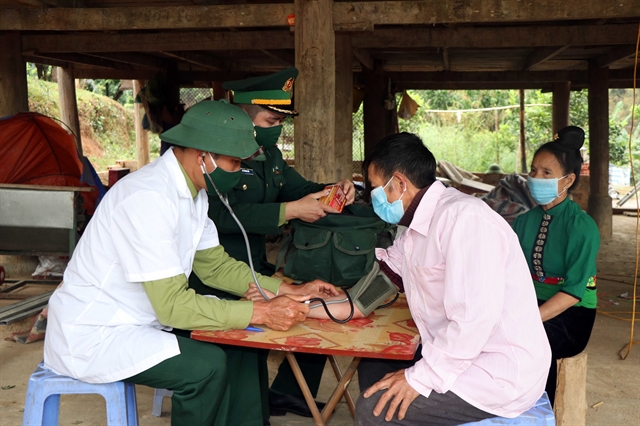 SƠN LA — Military doctors at border stations in the northern province of Sơn La have contributed to raising awareness in healthcare and achieved remarkable results in public medical centres, especially during the COVID-19 pandemic.

Vì Văn Vang, a resident from Nà Kham Village, Mường Cai Commune, Sông Mã District, told Tin Tức (New) newspaper that the health of local people had improved since they were examined and cared for by military doctors from Mường Cai border station.

Vang said in previous years, he and his wife often bought medicine to treat flu if they got sick.

Now they would get free medical check-ups and medicines at home since army doctors were stationed in the locality, Vang said.

Local people find it hard to access healthcare services due to the rugged and mountainous terrain.

“My house is 10km from the commune centre, so it takes a long time to get to the medical station for a check-up,” Lò Thị Khiêng, from Nà Kham Village, said.

Khiêng said now, the doctors would visit patients’ homes if they felt unwell.

Every day, the army doctors visit each village to take care of local people’s health.

People living in border areas still faced many difficulties, so they could not afford the treatment at health facilities.

The military doctors at the border point carried out monthly and quarterly free medical check-ups for people, Thiện said.

In the past, every time someone fell ill, the first thing their families would do was to consult the shaman.

Over the past ten years, people’s awareness of health has improved since the border station was set up.

Severe patients would be transferred to district-level hospital if the station’s capacity and facilities were insufficient, Hiệp said.

Over 1,000 people receive free health check-ups and medicines every year.

The funding comes from the State budget and partly from contributions made by officials and soldiers themselves.