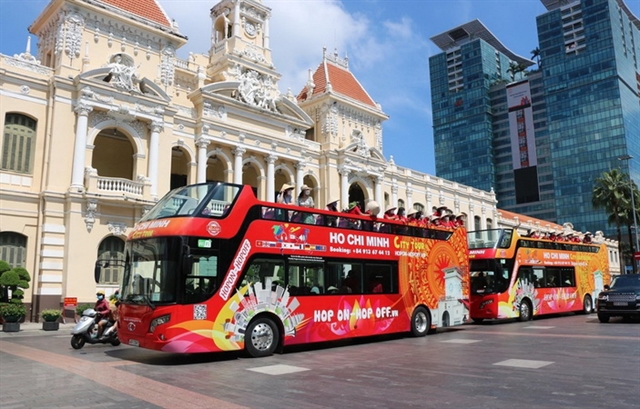 HCM City, one of the most popular destinations in the country, is banking on foreign visitor for a strong revival of the tourism industry. — VNA/VnExpress News Photo

HCM CITY — Nearly 91,000 foreigners visited Việt Nam in the first quarter of the year, up 89.1 per cent year on year.

This signals a robust recovery for the tourism and aviation industries that were hit hard by almost two years of pandemic related closures, according to a first quarter socio-economic report by the General Statistics Office.

International visitors to Việt Nam within March increased by 41.4 per cent compared to the previous month and 2.2 times in the first quarter of 2022.

Flights accounted for the highest number of foreigner arrivals at nearly 90.5 per cent of the total, an increase of 165.2 per cent over the same period last year. The number of foreign tourists arriving by road and sea decreased.

The HCM City People’s Committee has recently revealed its full tourism resumption plan in the new normal period. The aim is to boost the image of Việt Nam in general and HCM City in particular as a safe and attractive destination.

The city’s tourism industry is expected to thrive after the March 15 opening with revenues this month estimated to increase by 3.1 per cent month-on-month and up 1.4 per cent year-on-year.

At the city’s Tân Sơn Nhất International Airport, the number of international arrivals has doubled in two weeks.

A total of 571 flights took off from or landed at the airport on April 1, with international flights accounting for 56 departures and 65 arrivals. Of more than 71,800 passengers passing through the airport, nearly 10,000 were international tourists.

Current tourism business and revenue is dominated by the domestic market, but the full resumption of international tourism is expected to play a significant role in the industry’s revival over the coming months. — VnExpress News