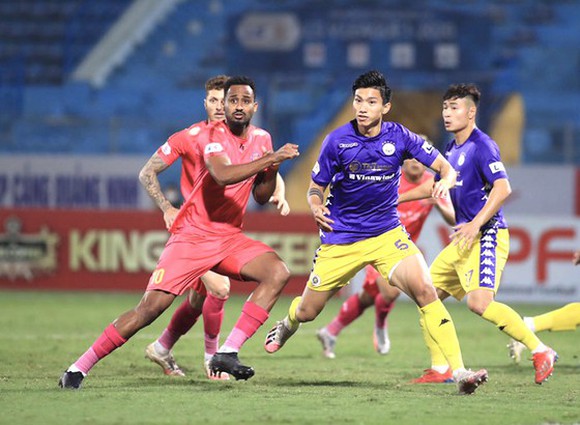 After nearly two years out due to a serious knee injury, Đoàn Văn Hậu (5) is almost ready to return to full fitness. Photo thethao.sggp.org.vn

HẢI PHÒNG — After a year and nine months on the sidelines with a serious knee injury, Đoàn Văn Hậu is almost ready to return to competitive football.

The 23-year-old left-back was injured playing for his club Hà Nội FC in September 2020 and had to undergo surgery on his knee.

Then, in September 2021, Hậu suffered a recurrence of the injury, ruling out his return in time for the remaining World Cup qualifiers.

After successfully undergoing another operation in South Korea in November 2021, Hậu has gone through a strict recovery plan with the Hà Nội FC medical team.

Heralding his return to almost full fitness, he has been named on the shortlist of players for Hà Nội FC at the Four Heroes Cup.

However, Hậu isn’t rushing his return to competitive football.

“My injury has made much progress but I still need more time to recover, so I won’t probably play,” said the national team defender.

“Despite not playing, training with the team is good for my recovery. Hopefully, I can come back after this tournament.”

According to Hải Phòng’s manager Chu Đình Nghiêm, the tournament is really useful for clubs to warm up and be ready for the V.League’s return.

“We can learn a lot from these strong teams,” said the former Hà Nội FC coach.

“They are the three strongest teams in Việt Nam at the moment and that’s really good for our young team to gain more experience.”

The tournament will take place at Lạch Tray Stadium from June 4 to 8 in the round-robin format. VNS