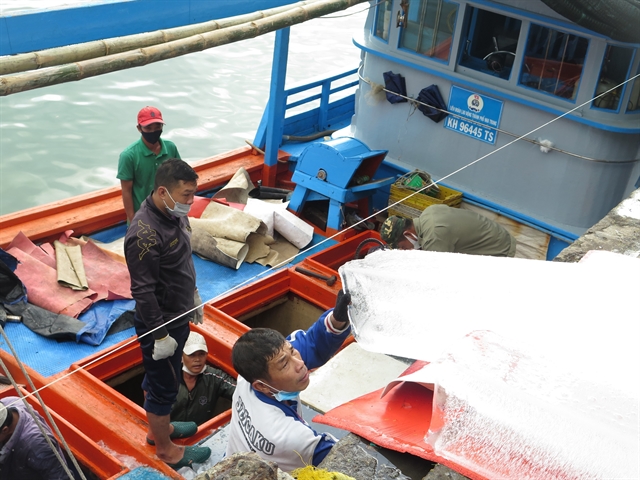 HÀ NỘI — Việt Nam’s ministries and sectors have been pushing measures to complete the goal of removing the Europe-imposed ‘yellow card’ for illegal, unreported and unregulated (IUU) fishing in 2022 and 2023.

If IUU fishing is not resolved, Việt Nam will be identified as a non-cooperative country and most likely be given a ‘red card,’ a measure that causes all fishery products from IUU fishing to be banned from export to the EU.

In 2017, the European Commission issued the yellow card warning to Việt Nam, meaning all shipments of seafood exported from the country to Europe will be subject to checks instead of random inspections like before.

Since earlier last year, the Ministry of Agriculture and Rural Development and the Directorate of Fisheries have reviewed and promptly completed the system of legal documents to develop a project of preventing and combating IUU fishing by 2025.

According to the Directorate of Fisheries, the installation of the fishing vessel monitoring systems has been pushed by localities.

The situation of Vietnamese fishing vessels violating fishing rules of nations in the Pacific has been controlled but there are still violations in some countries of Indonesia, Malaysia, and Thailand.

As of November last year, there were 60 cases with 98 ships and 775 fishermen across the country detained by foreign authorities, decreasing by 32 per compared to the same period of 2020.

However, after a meeting with the EC on reporting progress on IUU implementation, the inspection team of the EC’s Directorate-General for Marine Affairs and Fisheries (DG-Mare) continued to point out some shortcomings and limitations in the process of overcoming Việt Nam’s yellow card.

Many fishing vessels had lost connection with the VMS, the control of fishing vessels entering and leaving ports, and outputs to wharves had not yet met the requirements and controlling foreign ships under the Port State Measures Agreement (PSMA Agreement) still exposed shortcomings.

Seafood is Việt Nam’s fifth-largest export in terms of value, accounting for about 4 per cent of the total export turnover.

The seafood export value in recent years has fluctuated between US$8.5-9 billion per year, of which aquaculture products make up 60-65 per cent, and the rest from natural fishing.

Since being imposed the yellow card, Việt Nam’s seafood exports have been badly affected and continuously decreased over the years.

The EU market, which used to be the second largest seafood market for Việt Nam with a turnover of US$480 million per year, has dropped to 5th position since 2018.

High export costs, lengthy customs clearance and checking of marine shipments to the EU had caused many difficulties for seafood exporting businesses, fishermen, and the reputation of Việt Nam’s seafood industry.

According to Deputy Minister of Agriculture and Rural Development Phùng Đức Tiến, at present, the EU made four groups of recommendations for Việt Nam’s seafood including the legal framework, the 2017 Fisheries Law , two decrees and eight circulars consulted.

“Recently, we just submitted to amend decrees 42 and 26 and one circular to update the practical situation. Thus, we completed the legal documents, said Tiến.

“Regarding fishing vessel control, the Government had asked to stop violations of fishing boats. This was an important factor in removing the yellow card.”

Managing ships at sea and entering ports was also an important factor to ensure traceability. The importers carefully inspect boats’ longitude, latitude, time and their tools,” he said.

One shortcoming that needed solving this year was law enforcement.

The law enforcement was inconsistent among localities. For the same violation, some provinces imposed fines, but others just gave warnings.

Law enforcement is only effective when all provinces do it synchronously, Tiến said.

The infrastructure of the fisheries sector is also still weak due to a lack of proper investment.

Fortunately, the Government decided to pour money into the fisheries infrastructure in 2021-2025 as part of Việt Nam’s fisheries development strategy.

Trần Đình Luân, director of the Directorate of Fisheries, said that this year the agency would have measures to enhance law enforcement to reap good results for the next examination.

Meanwhile, affirming the determination of removing the yellow card, the localities will raise awareness of IUU fishing among fishermen along with strict controls.

Kiên Giang Province, which has the largest fishing fleet accounting for 16 per cent of the country’s fishing yield, has recently proposed the Government support the establishment of a local fishing surveillance force to improve inspection capacity at sea.

The province will complete the VMS installation for all fishing boats this year.

In the past, the province had many fishing boats and fishermen violating foreign territorial waters, but in the past two years, there were violations detected.

Many fishermen had volunteered to monitor and supervise the observance of the Fisheries Law and regulations on anti-IUU fishing.

The fishermen will notify and coordinate with functional forces to prevent and handle violations.

Lê Xuân Huỳnh, head of IUU supervision team of Tân Thuận Commune of Hàm Thuận Nam District, said that in the past, fishing boats using explosives to fish was common.

But since the supervision teams were formed, the situation had stopped, Huỳnh said.

With the investment of resources and the participation of the political system and localities, Việt Nam aims to have the yellow card for IUU fishing removed this year. — VnExpress News