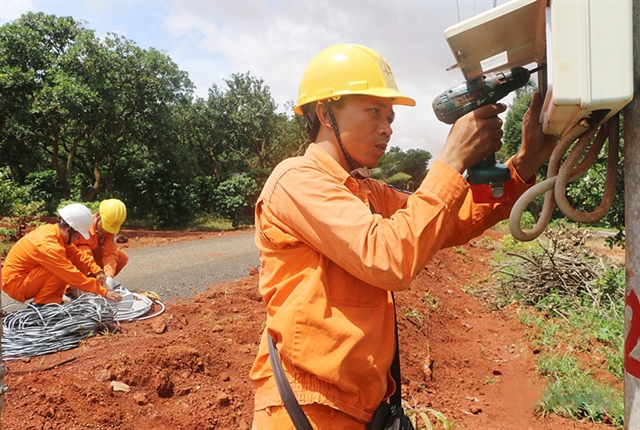 BÌNH PHƯỚC — Thanks to State investment in the electricity sector, the power grid system has spread from urban areas to remote, border and ethnic minority areas in Bình Phước southern province.

The percentage of households using electricity in the province is 99.15 per cent.

Many households could not hide their joy when accessing the grid in the new year to help them go about their daily lives.

Road 10 Commune is a remote commune of Bù Đăng District, a locality with a large number of ethnic minorities. Due to the large area, residents live far away from each other, so bringing electricity to the commune posed difficulties.

After more than 20 years, local authorities and the power sector recently made efforts to bring electricity to many local households.

Before accessing the grid, Nguyễn Thị Vóc’s family found doing their work very inconvenient. In the evening, Vóc had to use an oil or battery lamp.

The electricity shortage affected her children’s learning. Crops often suffered from a lack of water in the dry season leading to low yields.

“This is a remote area, so having electricity was not only my family’s desire but also many households’. Since we have electricity, we have now bought electrical appliances and it is easier for our children to study,” said Vóc.

Vóc is also excited because having electricity will make irrigation in the upcoming dry season more convenient.

“We are very happy and thank you all for bringing us electricity,” she said.

Thị Rem, a S’Tiêng minority living in Village 2, is also happy with the electricity system.

Light from the grid brought happiness to more than 150 households here. People are excited because electricity will aid daily life after decades of waiting.

Deputy Chairman of the Road 10 Commune People’s Committee Đào Văn Long said that some households lived so far away they still could not access the grid. To solve such difficulties, they installed solar energy systems.

Deputy Director of the Bù Đăng District Electricity Nguyễn Anh Tuấn said that the electricity sector had called for investment to upgrade and set up a new system for remote areas.