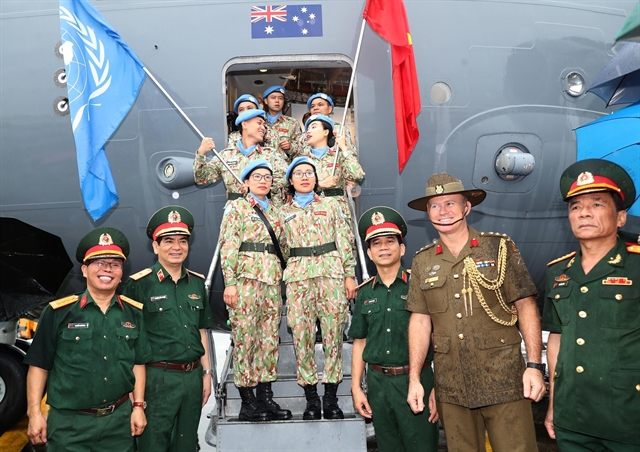 HÀ NỘI — A send-off ceremony for the 2nd sortie of Rotation 4 of Việt Nam’s Level-2 Field Hospital to a UN peacekeeping missions in South Sudan was held on Tuesday in the military airfield of Division 371 of the Air Defence – Air Force Service.

Speaking at the event, Major General Hoàng Kim Phụng, director of the Việt Nam Department of Peacekeeping Operations, expressed his hope that members of the detachment would successfully complete the tasks entrusted in them by the Party, State, Army and the people.

He urged the group to well perform the role of “ambassador” of peace and friendship, contributing to raising the prestige and international position of the country and the Việt Nam People’s Army globally.

Australia again provided the transportation for the Vietnamese officers to the mission with the Royal Navy’s Boeing C-17 Globemaster III.

The hospital was launched in November 2021 with 63 official members, including 12 female soldiers.

It was deployed to replace the Rotation 3 of Việt Nam’s Level-2 Field Hospital in South Sudan.

The hospital will focus on applying science and technology in medical examination and treatment, thereby learning from experience to work on research scientific work, and continue preventing and controlling diseases in the harsh environment.