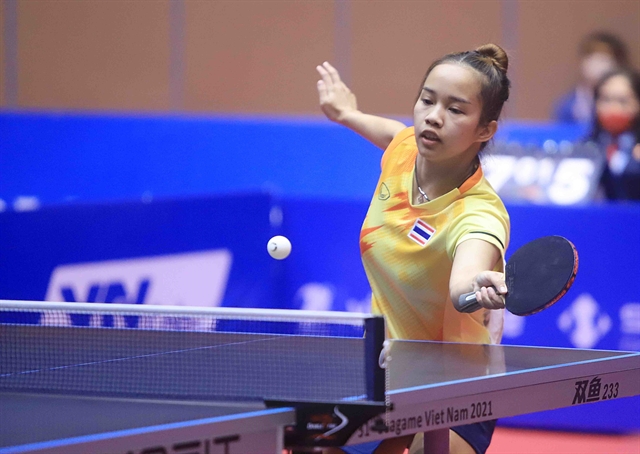 HẢI DƯƠNG — Superb performances from the Thai pair Suthasini Sawettabut and Orawan Paranang in the semi-finals created an all-Thai final in the table tennis women’s singles at Hải Dương Sports Complex on May 20.

In the first best of seven, veteran Sawettabut took on newbie Ho Ying of Malaysia playing her first-ever semi-final in this category.

While the first game was a walk in the park for Thailand, the second match between Paranang and Singapore’s Zeng Jian took audiences on an emotional roller coaster.

The “early final” between the two top seeds lived up to fan expectations, with the two players constantly chasing each other every point

In the first set, the Thai player won 11-8, but Jian equalised in the next game with a narrow 13-11 victory.

Jian’s hope for a great comeback boosted her strength to surpass Paranang 11-6 in the third set, but the Thai showed her class by balancing the score with an 11-8 win in the fourth game.

It looked as though Jian could finally silence her opponent after an intense 11-9 advantage in the fifth set. But once again, the Thai player proved why she is one of the best players at the Games, showing incredible mental strength, only letting the Singaporean score twice in the sixth set to equal the score with a big 11-2 win, leading into the final game.

Paranang started the decisive seventh set slow and was led by the first two points. However, the time–out called by the Thailand team was enough for the 24-year-old player to find her rhythm, scoring consecutively and winning the final set 11-7.

In the men’s single category, Thailand’s Phakpoom Sanguansin added to a flourishing day for Thai table tennis with a 4-2 win against the hosts’ Nguyễn Anh Tú in the first semi-final.

The men’s and women’s finals take place on May 21 at the Hải Dương Sports Complex. — VNS