FDI to Việt Nam predicted to surge in 2022 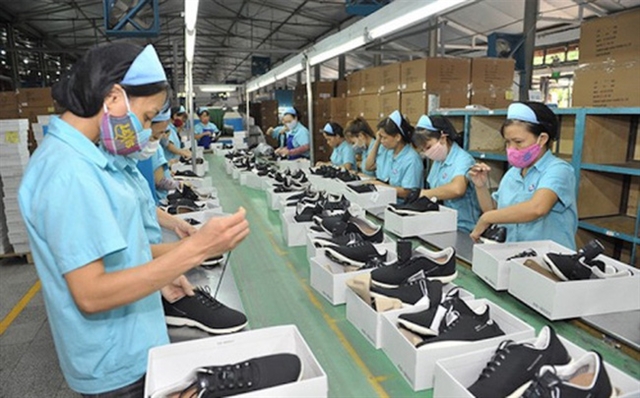 Workers at a footwear factory in Việt Nam. During the first two months of the year, Việt Nam recorded US$2.1 billion in new investment with $1.6 billion disbursed. — VNA/VnExpress News Photo

HÀ NỘI — Việt Nam remains an attractive destination for Foreign Direct Investment (FDI), which is likely to experience a surge in 2022 after a long hiatus due to the pandemic, according to economic experts.

During the first two months of the year, Việt Nam recorded US$2.1 billion in new investment with $1.6 billion disbursed, respectively a 6.8 per cent and a 4.2 per cent increase from the same period last year.

Much-anticipated projects include a sound equipment factory in WHA Industrial Park in Nghệ An Province, which just received over a quarter of a billion dollars in investment to upscale its production and technology. Once completed, the factory is expected to employ up to 30,000 workers, making it one of the largest projects in the province.

Nguyễn Đức Trung, chairman of the provincial People’s Committee said the province’s top priority was to improve the investment environment to win over the confidence of firms and attract more investment in the future.

According to the Department of Foreign Investment, 71 FDI projects have applied to increase their investment in recent months, a positive sign for the manufacturing sector as it shows a strong effort to speed up recovery by firms.

An increase in the number of new projects and investment in existing projects shows the strong confidence of foreign firms in the country’s investment environment.

Đỗ Nhất Hoàng, head of the department, said the country had been working with foreign partners looking to relocate their production centres. Bringing their investment home is an effective way to support Vietnamese firms in their integration into the global supply chain.

Hoàng said foreign investment was likely to pick up in 2022 as countries around the world reopen and learn to adapt to the new normal post-pandemic.

Takeo Nakajima, head representative of the Japan External Trade Organization, said Việt Nam would continue to be one of the most attractive investment destinations for Japanese firms, especially after the visit to Japan by Prime Minister Phạm Minh Chính who oversaw 25 cooperation agreements worth up to $12 billion.

“The agreements have set up a strong foundation for Japanese investment to flow into Việt Nam in 2022 and the near future,” said Nakajima.

European firms have been showing stronger confidence in the Southeast Asian economy.

EuroCham’s Business Climate Index (BCI) reached its highest point since the fourth wave of the coronavirus, with positive sentiment reaching 61 points, a jump of 42 points since the third quarter of 2021, with business leaders welcoming the end of lockdowns and the re-opening of normal commercial operations.

While the BCI remains below its pre-pandemic peak, confidence is returning to the market with 43 per cent of firms saying they have plans to increase investment within the first quarter of 2022.

“Major businesses from South Korea, Japan, Europe and the US all have plans for new investments in Việt Nam in 2022, especially US businesses,” said Minister of Planning and Investment Nguyễn Chí Dũng.

He said to make the most out of foreign investments, the country must conduct a comprehensive review of its available resources, particularly land and energy capacity.