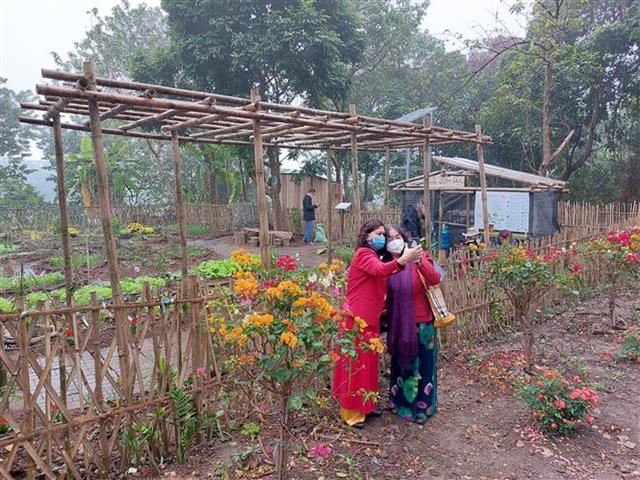 People take a photo at the land plot along Red River bank which has been revived for community activities. —VNA/VnExpress News Photo Đinh Thuận

HÀ NỘI — Abandoned and polluted land plots along the banks of the Hồng (Red) River in Hà Nội’s Hoàn Kiếm District have been revived and become art spaces and places for community activities.

Two years ago, a 500m-long garbage dump next to the Red River bank, located in between Long Biên and Chương Dương bridges, in Phúc Tân Ward, was a place that no one wanted to enter.

However, this area has now become an art space created by Hà Nội’s artists and designers.

On the wall separating residents’ houses and the riverside, the artists and designers created 16 artworks made of different materials, telling stories about the history of the Red River, the lives of the people living along the river and Hà Nội’s culture.

Most of the artworks are made from recycled and eco-friendly materials.

In early 2021, a playground was also completed in Phúc Tân with a wall of painted fruits. It has a little interaction with one of Hà Nội’s biggest fruit markets in the Long Biên area.

The Think Playgrounds organisation and artists also completed other public art works in Phúc Tân ward, inspiring children and adults to get to know the area’s history.

Recently, an abandoned area filled with garbage and wastewater along the Red River in Chương Dương ward has also been developed into a multi-functional site for local people.

The project, chaired by the Network for Liveable Hà Nội, mobilised a large number of members of the local Women’s Union, Veterans Association, Youth Union and organisations.

More than 200 tonnes of garbage was removed, while wastewater was treated before being discharged into the Red River.

The area has been turned into a 1,500sq.m public space with a playground for children, sports facilities, greenery and paths for walking.

Importantly, awareness of preserving the environment has been raised through training sessions on waste management and reduction, and wastewater treatment.

The projects have made loval lives more colourful. Habits of environmental protection, planting trees and growing flowers are also gradually formed, creating a change in the landscape and quality of life, she said.

Vice chairman of Hoàn Kiếm District People’s Committee, Nguyễn Anh Quân, said the problem of waste treatment and environment pollution is always an urgent task in the capital city due to its high population density.

Environmental improvement projects on the banks of the Red River have changed lives here, Quân said, adding that clean and beautiful roads, flower gardens and playgrounds are formed and wastewater is treated.

Othe projects are expected to be implemented in the future, he said.

Lê Quang Bình, coordinator of the Network for Liveable Hà Nội, said he hopes other projects will be replicated in other areas of the Hồng riverbank.

The success of these projects is thanks to the support of many organisations, individuals and communities in expanding green spaces for Hà Nội.

The projects have also promoted the value of the natural environment and local culture as well as the economic development of the city. — VnExpress News