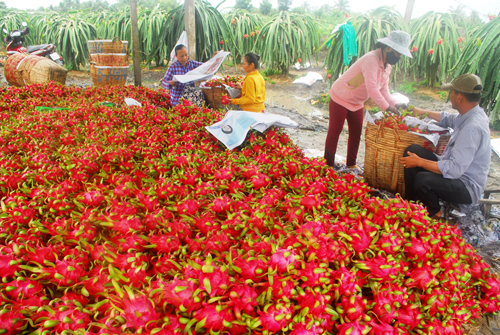 HCM CITY – Dragon fruit prices are falling sharply because it cannot be exported to China, and farmers are in dire need of support from the Government, experts said.

Exports of agricultural products through border gates to that country are facing huge difficulties.

Thousands of container trucks are stranded at the border, queuing for customs clearance, according to Âu Anh Tuấn, director of the Customs Control and Supervision Department.

But more trucks continue to arrive, worsening the situation.

Authorities are now looking at ways to get the trucks cleared to cross the border at a faster pace and ease the congestion.

China’s tightened COVID-19 preventive measures for people, vehicles and goods packaging have led to customs clearance becoming much slower than normal at some border gates.

The inability to export to China has caused a sharp drop in agricultural prices, and farmers are facing big losses.

According to their calculations, a kilogramme of off-season dragon fruit must sell for VNĐ7,000-10,000 per kilogram to break even due to the high cost of fertilisers and electricity, but currently prices are VNĐ1,000-2,000, and even VNĐ500 in some places.

The cost of labour for harvesting is VNĐ600 per kilogramme.

Export by sea is too expensive.

Huỳnh Cảnh, vice chairman of the Bình Thuận Province Dragon Fruit Association, said shipping cost had increased from US$1,600 per container at the beginning of 2020 to $5,000 by year-end, and now it costs $9,100.

According to the Vietnam Maritime Administration (VMA), the pandemic has forced shipping companies to cut back on operations, causing a shortage of empty containers, while the closure of many ports around the world has also contributed to rising shipping costs.

To help farmers, the Bình Thuận Dragon Fruit Association are looking at domestic consumption channels like traditional markets and supermarkets, but demand is modest.

Nguyễn Tuấn Thanh, director of the province Department of Industry and Trade, said his department helped the Long An Dragon Fruit Association sell its members’ products to supermarket chains, large stores, wholesale markets, and shopping malls across the country.

Nguyễn Quốc Thịnh, chairman of the Dragon Fruit Association of Long An Province, said the fruit would be harvested until the Lunar New Year and farmers had expected to get a price of VNĐ15,000 ($0.66) per kilogramme.

But with exports to China falling to a trickle, the association had urged authorities to step up promotion to help find customers elsewhere, especially in India, and develop the domestic market through supermarket chains to reduce dependence on China.

With vegetarians making up a large proportion of the Indian population and people there consuming imported dragon fruit at weddings, it is potentially a huge market for Việt Nam, experts said.

Việt Nam grows around 1.4 million tonnes of dragon fruit a year, more than 60 per cent of it in the second half of the year.

To create demand for the fruit, it is necessary to hold more trade forums to promote it globally and also develop the domestic market, experts say. – VnExpress News