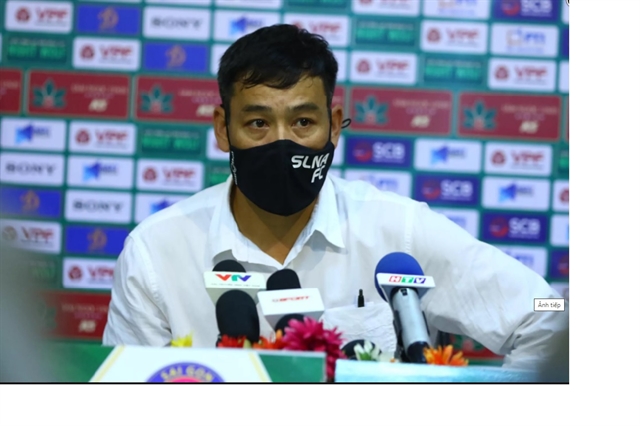 Coach Nguyễn Huy Hoàng of SLNA said he was satisfied with the performance of his players after the 1-1 draw with Sài Gòn FC on Sunday. — Photo danviet.vn

HÀ NỘI  Sông Lam Nghệ An (SLNA) coach Nguyễn Huy Hoàng is satisfied with the performance of his team after their 1-1 draw with Sài Gòn FC on Sunday.

Speaking after the match, Hoàng said he considered the hard-fought point a success especially as the match was played away at the Thống Nhất Stadium in HCM City.

After taking the lead through Nigerian striker Ganiyu Oseni on the stroke of half time, the home side managed to bring the scores level just before the hour mark when Argentinian Gastón Merlo levelled.

“We gave them space so they had a chance to level the score,” said Hoàng.

“I’m sorry that after we scored first we couldn’t hold on to get the win. But I think that a point at the Thống Nhất Stadium is also a success.”

However, coach Hoàng brought in young players Đinh Xuân Tiến and Trần Mạnh Quỳnh from the U23 team who proved their talent.

“Though they are still very young, they played very maturely, and integrated well with the team’s play,” said Hoàng.

Despite being the away team at the Thống Nhất Stadium, SLNA’s fans were well represented in the stands, contributing to an extremely exciting atmosphere.

“With the support of fans, our team played very well. I thank them much. Their presence gives the team the confidence to achieve the goals set out this season,” said Hoàng.

After Sunday’s games, the teams in the national premiere league will have four months off to make room for the training and competition plans of the national senior team and U23 team.

However, SLNA still have to play in the 2022 National Cup.

Hoàng said: “After four games in the V.League 1, we will find the strong and weak points that SLNA players have made to continue to develop. I believe that with the serious work of the whole team, we will play better when the league returns.”

Meanwhile, coach Phùng Thanh Phương of Sài Gòn said his team had a plan to take advantage of the four-month break of the league.

He said: “We support the plan of the Việt Nam Football Federation (VFF) and the Việt Nam Professional Football Joint Stock Company (VPF).

“We have to divide our time to adapt to the plans. I think the V.League 1’s four-month break does not really affect things. This is a common situation for all teams.

“However, with other issues like the finance, it’s a different story. But, that’s the part that leaders must deal with.” VnExpress News