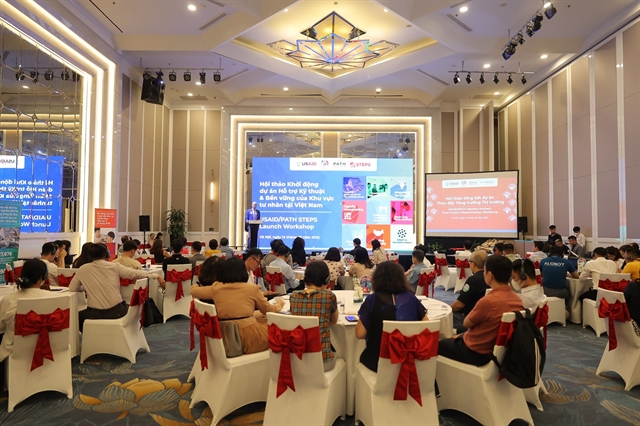 HÀ NỘI — The US Agency for International Development (USAID) and its partner PATH celebrated the completion of the eight-year USAID/PATH Healthy Markets project on Tuesday. It launched the new five-year USAID/PATH STEPS project.

The US$20.7 million USAID/PATH Healthy Markets project ran from 2014 to 2021 and was funded by the US President’s Emergency Plan for AIDS Relief.

Through the project, USAID and PATH worked with the Ministry of Health’s Việt Nam Administration for HIV/AIDS Control (VAAC) to generate sustainable approaches for increasing investment in, demand for, and supply of transformational HIV-related goods and services.

USAID/PATH Healthy Markets was a key partner to the Ministry of Health in its introduction and scale-up of new and innovative approaches like HIV community-based testing, self-testing, and pre-exposure prophylaxis, or PrEP—three key services that contributed to a 57 per cent reduction in new HIV infections over the past decade.

HIV self-test kits are now widely available through pharmacies and e-commerce, community-based testing services are being offered in 33 of Việt Nam’s 63 provinces, and PrEP has been scaled to 29 provinces.

Through Healthy Markets–supported models alone, nearly 218,000 people were tested for HIV in the community and 8,986 people newly diagnosed with HIV were enrolled on lifesaving treatment. In addition, more than 46,000 HIV self-test kits were distributed, and 16,700 people enrolled on PrEP, an oral pill that effectively prevents HIV infection when prescribed.

Healthy Markets redefined the role of communities in the response, which is critical because key populations at risk for HIV–including men who have sex with men, transgender people, sex workers, and people who inject drugs–often prefer to receive HIV and other health services from their peers in community settings.

The project mobilised more than $12.6 million in investment into the national HIV response by facilitating deep shared-value partnerships with more than 150 private-sector partners, including HIV goods manufacturers and suppliers, distributors and retailers, community service providers, and multimedia companies.

“Over the past eight years, USAID support addressed critical gaps in accessible, affordable, community-based HIV care while strengthening the domestic market for HIV-related goods and services. As we step up the fight against HIV in Việt Nam, our next project will focus on ensuring the sustainability of our collective progress and addressing key remaining gaps to ultimately help Việt Nam achieve its commitment to end AIDS by 2030,” said Bradley Bessire, Deputy Mission Director, USAID/Việt Nam.

Given more than 95 per cent of the current oral PrEP market is subsidised by international donors, a major focus of the project will be on increasing sustainable PrEP financing through a blend of commercial, public-financed, and free PrEP services.

The USAID/PATH Support for Technical Excellence and Private Sector Sustainability in Vietnam (STEPS) project will amplify access to integrated person-centred HIV and Primary Healthcare (PHC) services through innovative models of care; boost demand for and use of game-changing health tools and technologies; and identify promising new public-private collaborative approaches that could significantly enhance the sustainable supply, delivery, and demand for HIV and PHC goods and services.

Combined, these efforts will support Việt Nam in attaining its epidemic control goals outlined in the National Strategy to End AIDS by 2030. STEPS will catalyse community co-creation, VAAC governance and key population leadership, and targeted market and service delivery innovations to achieve these goals.

At the launch, Associate Professor Phan Thi Thu Huong, Director of Vietnam Administration for HIV/AIDS Control, said: “USAID/PATH Healthy Markets has continued to accelerate innovative health solutions significantly contribute to the HIV/AIDS response in Việt Nam. I trust you will maintain your momentum and the inspiring energy moving into the new USAID/PATH STEPS project.”- VNS