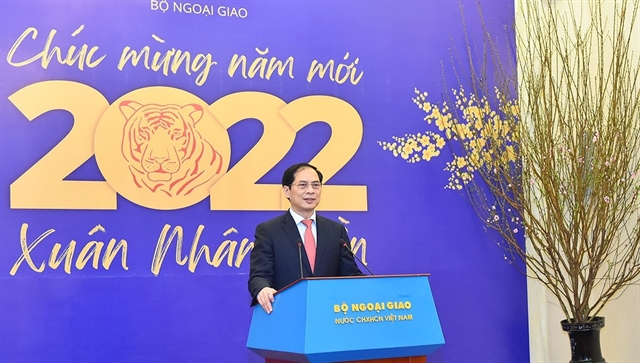 HÀ NỘI — Many important achievements in external affairs last year affirmed the clear-sighted foreign policy of the Party and State, the support and consensus of the entire political system and people, and the close coordination among all-level authorities and sectors.

Minister of Foreign Affairs Bùi Thanh Sơn made these remarks while talking to the press on the occasion of the Lunar New Year about the recent outstanding diplomatic achievements of Việt Nam, attributing those accomplishments to major contributions by agencies of external affairs, with the diplomatic sector being the core.

He pointed to the significant accomplishments, such as Việt Nam promoting ties with partners to help consolidate the stability of external relations, noting that the country also worked effectively to elevate multilateral foreign relations, which continued to affirm its stature and prestige.

In particular, Việt Nam has well fulfilled the role of a non-permanent member of the United Nations Security Council for the 2020-2021 term, promoting Việt Nam’s achievements as the 2020 ASEAN Chair, making active and responsible contributions to the building of the ASEAN Community in 2021, getting elected to many prestigious multilateral organisations such as the International Law Commission (ILC), the UNESCO Executive Council, the Postal Operations Council of the Universal Postal Union (UPU), etc.

Việt Nam committed itself to combating climate change at COP26, and made active contributions at many other important multilateral forums, Sơn noted.

Efforts in external affairs continued helping firmly safeguard the sovereignty, unity, and territorial integrity of the country; economic diplomacy was implemented in a robust and increasingly practical and effective manner – especially to consolidate foreign investors’ confidence in the business and investment environment.

Besides, overseas Vietnamese affairs were handled more comprehensively and strongly, Sơn went on, highlighting the uniform and effective protection of citizens amid the complex COVID-19 pandemic.

The minister held that in 2021, Vietnamese people both at home and abroad brought into play the national solidarity, patriotism, and self-reliance to overcome difficulties and challenges.

He noted the attainments last year and during the past 35 years of Đổi mới (Renewal) has created strong confidence for stepping up socio-economic recovery and development as well as integration into the world, thereby helping to successfully realise the development aspiration and vision of the Party, State, and people.

The diplomatic sector always goes along with the nation and devotes itself to the Fatherland and people, the official also said. — VnExpress News