Defender Bình tipped as one to watch at Asian U23 champs 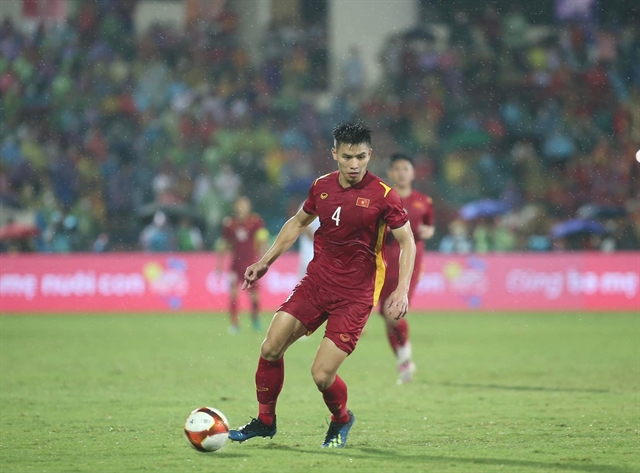 Defender Nguyễn Thanh Bình is seen playing in the SEA Games football tournament final. Binh is one of eight players to watch at the 2022 Asian U23 Championship. Photo of Viettel FC

HÀ NỘI — Vietnamese defender Nguyễn Thanh Bình is one of the players to watch at the Asian U23 Championship, which begins on June 1, according to the Asian Football Confederation (AFC).

The AFC has highlighted eight of the finest young talents in the tournament on its website.

The Asian football governing body expects the Vietnamese representative will have an impressive display at the upcoming continental tournament.

“Fresh off glory at the Hà Nội SEA Games, where he helped Việt Nam to a gold medal with a win over regional rivals Thailand in the final, Nguyễn Thanh Bình’s 2022 is turning into a banner year for the young defender, who already impressed for club side Viettel in the 2021 AFC Champions League,” the AFC wrote.

“Following his continental club campaign, the 21-year-old broke into the senior national team and had a moment that will go down in history as he scored against Japan at Saitama Stadium to help Việt Nam draw in the Asian Qualifiers for the FIFA World Cup Qatar 2022. What will come next for him at the AFC U23 Asian Cup?”

Lee is one of the biggest names in the tournament. He has long been tipped as one of the future stars of Asia, particularly after winning the 2019 FIFA U-20 World Cup’s Golden Ball award.

Al Ammar, 22, was named MVP at the AFC U20 Asian Cup and honoured with the 2018 AFC Young Player of the Year award 2018. It is widely hoped he will be the next Saudi football star.

Matsuki has already secured a regular place starting 11 for his club FC Tokyo and attracted interest from some of the biggest European sides.

The 20-year-old Norchaev boasts excellent positioning, with the ability to lose his marker, and is a clinical finisher.

Salmani, 20, was the second-highest scorer in qualifying and has since featured at the 2022 AFC Champions League.

Suphanat made headlines when he scored in the 2019 AFC Champions League as a 16-year-old, and he since has scored at all levels for Thailand’s national team.

There is no doubt that Suphanat, 19, has the ability and potential to join his sibling Supachok Sarachart in a move overseas.

Việt Nam, in Group C, will first play Thailand on June 2. Their following matches will be against South Korea on June 5 and Malaysia on June 8. VNS

Tags AFC U23 champs Nguyen Thanh Binh ones to watch