Woman who fell from cliff rescued after 7 days 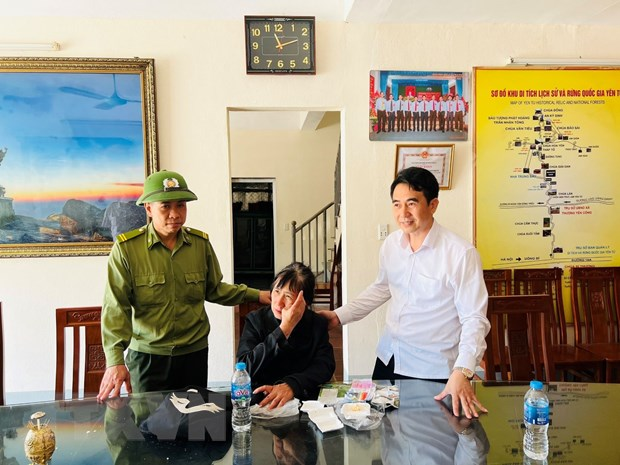 QUẢNG NINH — A woman has been rescued after falling off a cliff and spending a week in the wilderness.

In a story that resembles the hit movie ‘127 Hours’, 59-year-old Nguyễn Thị Bích Liên collapsed and fell off a cliff near Yên Tử Mountain, and was trapped there since April 27.

Still conscious and able to walk, she was found by local officials at 9.15am on May 3, after spending a week surviving on meagre supplies.

Liên said that she travelled to Quảng Ninh from Hà Nội on April 27 for a Buddhist gathering at Đồng Pagoda in the Yên Tử Complex of Monuments and Landscapes.

When she descended Yên Tử Mountain, she felt tired and sat down for a rest near the barriers of Đồng Pagoda.

Due to hypotension, she felt dizzy when standing up, stumbled and fell to an area 30 metres below. As the area was densely forested, Liên was fortunate not to have sustained severe injuries.

After the fall, Liên called for help and tried to climb up a tree, but failed and fell down again. She fainted once more.

When Liên woke up, she once again called for help but there was no response, partly due to the rainy weather.

She stayed in the area for seven days, surviving on only rice cakes, a bottle of water and tree ferns. Her calls for help was eventually heard and she was rescued by local employees.

The Management Board of Yên Tử Complex of Monuments and Landscapes said that an employee heard Liên’s calls for help during a patrol. The Board and Pagoda as well as Tùng Lâm JSC. quickly worked with local officials to locate and rescue Liên.

As of Tuesday afternoon, Liên’s health is stable and her family has been informed. She will soon return home. — – VnExpress News