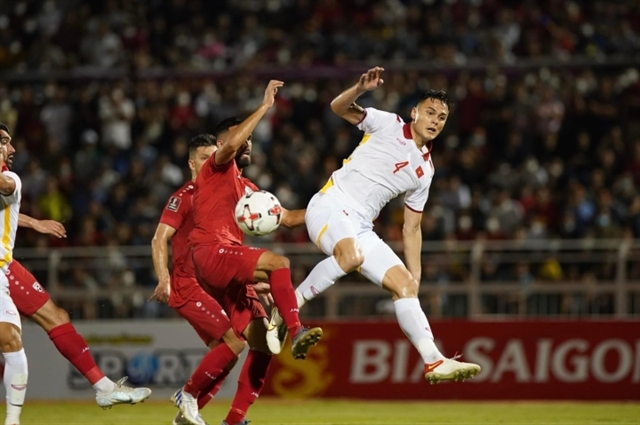 On his debut for the national team, Vietnamese-German Adriano Schmidt (4) made his mark with an assist for Phạm Tuấn Hải to score the opening goal in the friendly against Afghanistan. Photo vtc.vn

HCM CITY — A brace from Phạm Tuấn Hải sealed a 2-0 win for Việt Nam in the friendly against Afghanistan at the Thống Nhất Stadium on June 1.

The national team last played here five years ago, and the crowd at the Thống Nhất Stadium was happy to finally see the Golden Star Warriors in action again. And Park Hang-seo’s men didn’t disappoint the home supporters.

In this friendly to prepare for the AFF Cup at the end of this year, coach Park started the game with many changes, most notably with Phạm Tuấn Hải replacing the familiar face of Nguyễn Tiến Linh up front, and the 24-year-old player did not let his coach down.

With a goal in each half, Hải bagged his first-ever goals for Việt Nam and is certainly on his way to following Linh’s footsteps as one of the best Vietnamese forwards, and potentially solving Park’s headache of a lack of quality strikers.

Despite losing the match, Afghanistan were able to show their strength and quality as a team that’s not easy to beat.

It was Anoush Dastgir’s men who had the first dangerous opportunities with shots from Omid Popalzay and Kouhyar in the 16th and 19th minutes, testing the talent of goalkeeper Đặng Văn Lâm who wore the captain’s armband for the first time.

Afghanistan’s chances gave them confidence, but they also woke the hosts as the men in white started to regain possession through the flexibility of their main man Nguyễn Quang Hải.

Returning to the team after rumours of a transfer to Austria, Hải made his mark in the 32nd minute with a curving long shot from the right. The shot didn’t go in, but the corner kick that came from his shot a minute later was enough for the hosts to score the opener.

From Hải’s corner, the ball was fed to the far post for Vietnamese-German Adriano Schmidt who used his height to provide a brilliant headed assist to Phạm Tuấn Hải waiting in the middle to nod in an easy header.

It was Hải’s first goal for the national team, bringing momentum to the Hà Nội FC player and his teammates for the rest of the match. On this form, it could well be the first of many for the lively forward.

Ending the first half a goal behind, Afghanistan started to attack rapidly in the second half. But Việt Nam, with a batch of key players coming in, made it even harder for the visitors to find the equaliser.

And when the men in red could no longer their physicality after several unsuccessful attempts, Việt Nam put the final nail in the coffin.

After the match, Đặng Văn Lâm couldn’t hide his joy at leading the team out as captain.

“It’s wonderful. It has been a really long time since I last played for Việt Nam,” said the 28-year-old keeper.

“This is the first time I played as the captain of the national team and aside from a little pressure, I felt more confident and motivated, which was shown by the team’s good performance.”

Beating their opponents 2-0 will serve as good preparation for Park’s players ahead of the V.League’s return this June and the upcoming AFF Cup at the end of the year. VNS