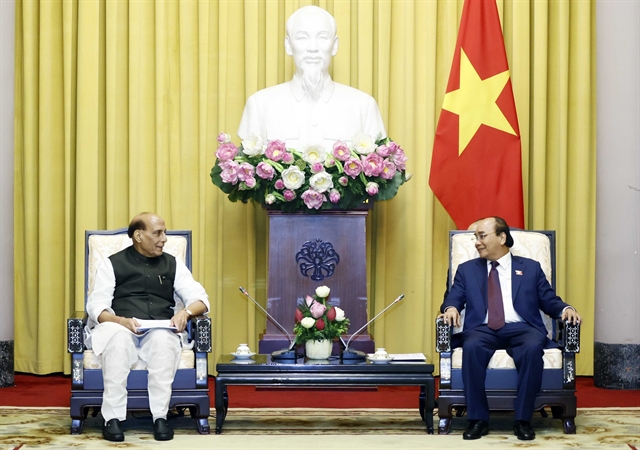 Welcoming his guest’s visit on the occasion of the 50th anniversary of Việt Nam-India diplomatic ties, the host leader spoke highly of the outcomes of talks between the countries’ defence ministers earlier the same day.

Singh said the Việt Nam-India comprehensive strategic partnership in all aspects, from politics, diplomacy, economy, trade, security and defence, to culture, education and people-to-people exchange, has been developing positively, even amid the COVID-19 pandemic. The two sides have assisted each other in fighting the pandemic, especially through the donation of vaccines and medical supplies, and now during the economic recovery.

He stressed defence cooperation is a highly critical area in his country’s Act East policy, voicing his hope for further ties with Việt Nam in this regard.

Informing his host about the talks with his Vietnamese counterpart, Minister Singh said the two sides took steps forward in cooperation, particularly the signing of a joint vision statement on the Việt Nam-India defence partnership towards 2030 and a memorandum of understanding on mutual support in logistics.

At the meeting, President Phúc shared the visiting official’s view that defence cooperation is a pillar in the two counties’ relations.

He highly valued the two ministries’ efforts to further reinforce political trust and their full, effective, and practical implementation of inked documents, along with the freshly signing of the joint vision statement on defence partnership towards 2030.

The State leader also thanked the Indian Government and Defence Ministry for their important assistance, which has helped improve Việt Nam’s strength in national defence, calling for the South Asian nation’s further help in this field.

He asked the two defence ministries to increase mutual consultation at multilateral forums and on regional issues while actively supporting and participating in multilateral activities held by each side, especially those within the framework of the ASEAN Defence Ministers’ Meeting Plus and activities between ASEAN and India. — VNS