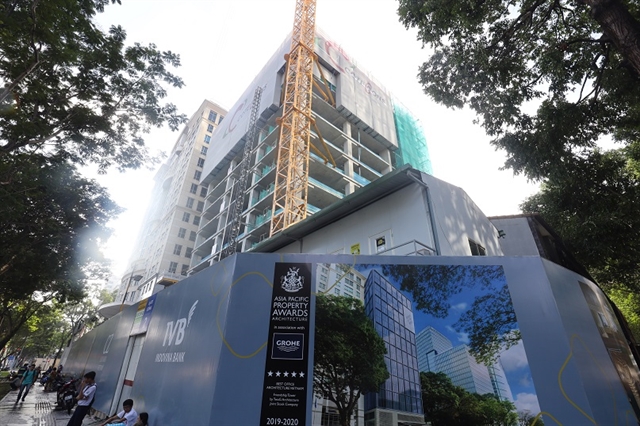 HÀ NỘI — Coteccons Construction Corporation (CTD) plans to achieve VNĐ20 billion (US$870,400) in profit this year, a decrease of 17 per cent year-on-year.

The information was released at the 2022 Annual General Meeting (AGM) held late Monday in the southern province of Quảng Bình.

The company targets revenue of VNĐ15 trillion, an increase of 165 per cent compared to 2021.

Responding to shareholders about this super-low profit target in 2022, Coteccons chairman Bolat Duisenov said there were a number of reasons for the figure.

The first was financial provision for bad debt, Bolat said, and that the company had to set up a reserve fund. Currently, Coteccons has 16 projects facing bad debt problems and in 2022 it is expected to make provision of up to VNĐ95 billion.

Secondly, the cost of raw materials globally as well as in Việt Nam is increasing, the cost of concrete alone has increased by 20 per cent.

The negative impact of the pandemic was still significant, strongly affecting the production and business situation in 2022.

Coteccons always considers people the most valuable asset of the company, so despite the difficult situation, the company still prioritises the livelihood of employees, not just focusing on profit, Bolat said.

Even in difficult circumstances, Coteccons still adheres to its commitment to quality despite high costs.

According to Bolat, Coteccons’ backlog in 2021 reached VNĐ25 trillion. In the first quarter of 2022, the new contract value reached VNĐ10 trillion. Coteccons won nine projects, its subsidiary won 10 projects. However, a project must be built in 2-4 years. Therefore, what Coteccons is trying to achieve may not be completed in 2022.

Coteccons will see results in 2023 and beyond. The company defines a long-term, sustainable development strategy, said Bolat.

Coteccons Chairman said the company aimed to reach $3 billion in revenue by 2025 and $1 billion in market capitalisation. To do this, the company has identified five strategic priorities: a differentiated business model, outstanding human resources, diversified product and service lines, innovative marketing and PR, and diversification of areas. The construction industry segments that Coteccons participates in include civil, industrial, commercial, infrastructure – transportation.

At the meeting, shareholders approved a plan of the reduction of charter capital from VNĐ792.5 billion to VNĐ788 billion. Previously in 2021, the Board of Directors implemented a stock buyback of retired employees under the Employee Stock Ownership Plan (ESOP) programme. The capital for the repurchase was VNĐ23.8 trillion. The purchase price was VNĐ56,000 per share.

The condition of the issuance is that the revenue in 2022 according to the audited consolidated financial statements must reach VNĐ15 trillion or more. Issuing price will be VNĐ10,000 per share. Buyers are members of the board of directors, key managers and other employees. These shares are restricted from being transferred for a year. All proceeds from the sale of treasury shares are used to supplement working capital for the company.

Regarding the implementation time, the General Meeting of Shareholders authorises the Board of Directors to choose a specific time in 2022, after receiving the written approval of the State Securities Commission. — – VnExpress News