New measures to be applied to ensure safe, pragmatic reopening 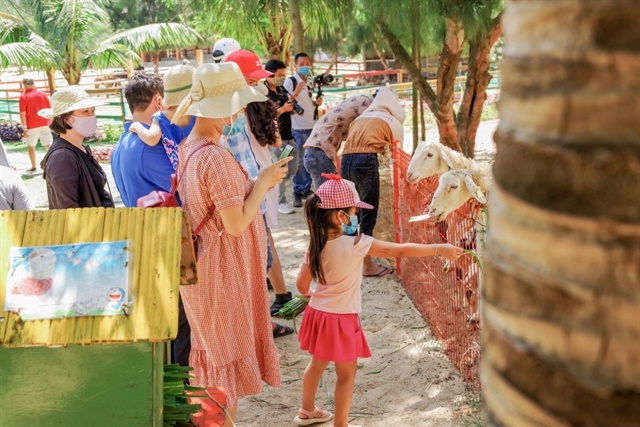 Visitors at the Safari Zoo Park in the FLC Quy Nhơn Golf and Resort Complex in the central province of Bình Định. — Photo courtesy of the firm

BÌNH ĐỊNH — The local tourism industry has a golden opportunity to reopen for international tourists on March 15, after a two-year border closure due to the pandemic. However, it is vital that safety and efficiency are prioritised alongside making the most of the opportunity, according to experts.

The country saw booming demand for tourism during the Tết (Lunar New Year) holiday. For example, over the nine-day holiday, the central province of Bình Định welcomed nearly 160,000 arrivals, a 40 per cent year-on-year increase. Within only two months, the number of tourists who came to the province rose by 37 per cent from the same period last year to reach 650,000 people. People are ready to welcome both local and foreign tourists from the beginning of March, especially when the Government has accelerated the third dose of vaccine to people.

“From the second day of the Lunar New Year Holiday, guests from other cities and provinces came here in droves. Accommodation and restaurants were crowded with tourists, while prices have remained stable,” said Trần Văn Thanh, director of Bình Định Department of Tourism.

According to data from the Department of Travel, the Tết holiday was an impressive start to tourism activities with 6.1 million domestic tourists and 3.2 million staying guests. The Tourist Information Centre, under the Việt Nam Tourism Association (VITA), released data showing that the number of international searches for Việt Nam’s tourism from the beginning of 2022 has increased sharply. From the beginning of January, the number of international searches for Việt Nam’s aviation has been very high. According to Google Destination Insights, the searching rate was sometimes at 425 per cent.

Vũ Thế Bình, VITA’s vice chairman said: “People’s desire to reopen tourism is not only a need for travel and entertainment, but also to develop people’s lives and economic sectors. The opening of tourism is not only the will of the tourism industry but also the common aspiration of many social classes, and the country as a whole.”

Commenting on the opening route of Việt Nam’s tourism, Bình said: “We can be confident with the decision to ‘open up the tourism industry’ because we have competitive conditions such as abundant natural resources. During the Tết, the whole country had 6.2 million tourist arrivals in nine days, showing the Vietnamese people’s willingness to travel.”

To welcome visitors from March 15, experts have made many recommendations and solutions to ensure the reopening goes off without a hitch.

Phương said in order to “catch up” with this opportunity, Việt Nam would apply many new measures such as applying electronic visas, exempting single-entry and bilateral visas. In this regard, the Ministry of Foreign Affairs and the Ministry of Public Security would report to the Government.

“In addition, the requirement for COVID-19 test results is also loosened. Currently, when entering via air, international guests will be able to apply both testing methods: PCR results are valid for 72 hours, rapid tests are valid for 24 hours. International tourists after having negative test results will be able to participate in tourism activities and self-monitor their health for 14 days, the same as domestic tourists,” he added.

Visitors entering through land and sea border gates only need to test at the border gates. If the result is negative, they will be allowed to enter, according to the new rules.

Đinh Ngọc Đức, Director of the Tourism Market Department under the Vietnam National Administration of Tourism (VNAT) said businesses were ready while people’s demand was very high, as evidenced by tourism results in the Lunar New Year.

“In this stage, in the local market, businesses should work together to renew products to suit the new context. They should also promote communication to activate people’s needs, affirming the safe tourism industry with suitable products. Regarding international tourism, agencies and departments should have their own programmes to attract tourists in both short and long term,” he added.

Bình agreed, saying that businesses should prepare products which are the most important of tourism.

“Products post-COVID-19 must be different from before, not according to movement but based on nature, attractiveness and must be new products,” he said.

For example, products on beauty, health care and sports such as golf and marathon-running should be exploited. In addition, it is necessary to pay attention to environmental and human resource issues after COVID-19.

Đỗ Việt Hùng, deputy general director of FLC Group, said: “It is necessary to have a comprehensive process, with the co-operation of management agencies, localities and businesses. Policy-consistency will be an effective solution to help tourism regain its growth momentum soon with the most positive scenario. Especially, in the context that the world economy is thriving, this will be a golden opportunity for tourism – Việt Nam’s golden economic sector to make a breakthrough when international tourists highly appreciate the safety factor in destinations”

In addition, human resources was a very important factor, he said. More than 2.5 million tourism workers were heavily dispersed during the pandemic as many of them had to change to other jobs.

“There is now a big demand for tourism and at the same time a shortage of service personnel.

“This is a test for businesses in the recovery process,” he said.

Accordingly, promotion will play an important role as an official information base for businesses to work with partners.

He said they would complete basic information on plans and a roadmap to open the tourism sector on March 15, including digitalisation as a priority task. Tourism products would be accessed through digitalisation.

The VNAT is working with international news agencies such as CNN and CNBC to target high-end and middle markets. It also proposed with the Ministry of Culture, Sports and Tourism on the establishment of a pilot office on national tourism promotion. — VnExpress News