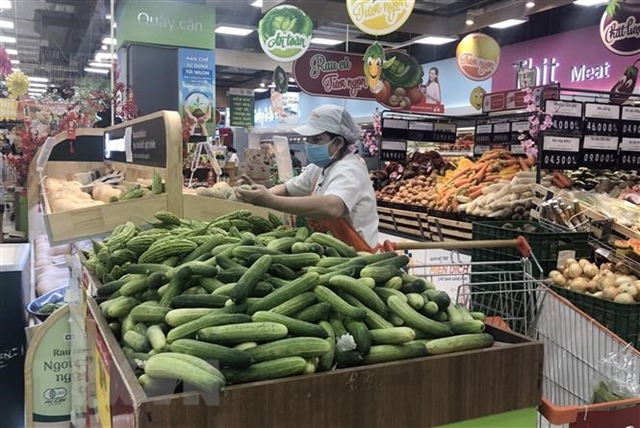 Customers shop for vegetables at a supermart in HCM City. — VNA/VnExpress News Photo

HCM CITY — Demand for Tết (Lunar New Year) goods at traditional markets and supermarkets increased sharply on January 31, the last day of the old year, but was still 10-15 per cent lower than last year.

In a report on the market situation it sent to the city People’s Committee, the Department of Industry and Trade said the number of visitors to traditional markets on the morning of January 31 was 20-30 per cent higher than on the previous day though 15-40 per cent lower than last year.

At modern retail stores, sales were up 30-50 per cent from the previous day, double the usual weekday sales but 10-15 per cent lower than last year.

At traditional markets, prices of some items such as pork, seafood, and fruits edged up by VNĐ5,000- VNĐ15,000 per kilogramme.

Due to the pandemic, the supply of flowers decreased by 20-30 per cent from last year.

Yet prices decreased by 20-30 per cent compared to previous days since many sellers wanted to sell out quickly and go home in time for Tết Eve.