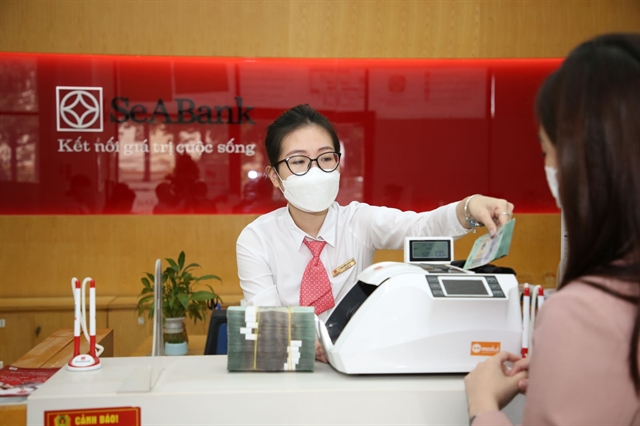 A customer at a SeABank office in Hà Nội. Photo cafef.vn

HÀ NỘI — The State Bank of Vietnam (SBV) has to continually inject money to support the liquidity of the banking system as the capital demand and interest rates on the interbank market have remained high though the Tết (Lunar New Year) holiday has ended.

It was different from previous years when the SBV didn’t need to inject money to support the liquidity of commercial banks or even had to withdraw money from the banking system when the capital demand was low after Tết.

Specifically, in three consecutive trading sessions of this week, the SBV injected nearly VNĐ13.93 trillion into the market through the open market operation (OMO) channel. At the session on Wednesday alone, seven banks borrowed nearly VNĐ7.94 trillion from the SBV’s channel.

Previously, in the last trading week before Tết when the capital demand during the payment season was high, the SBV injected VNĐ8.8 trillion into the banking system through the OMO channel.

Besides the seasonal factor, the SBV’s injection was in the context of rapid credit growth in the last months of 2021 and early 2022.

According to the SBV, credit as of January 25, 2022 increased 2.74 per cent compared to the end of 2021. Compared with January of the past ten years, the rise was the highest rate. According to experts, the surge was a positive signal, showing the economy is recovering strongly.

Currently, banks are facing many difficulties in mobilising deposits because interest rates are low while other investment channels such as securities and real estate are more attractive.

Banks’ financial reports for the fourth quarter of 2021 showed deposits of individual customers at many banks such as Sacombank, SeABank, ABBank, NCB, PGBank and Saigonbank declined last year.

To lure depositors, banks, especially private ones, have continually increased savings interest rates since this month.

VPBank in early February raised its rates for many terms by 0.7 percentage points per year compared to early January 2022. The highest online savings interest rate at VPBank is 6.7 per cent per year for deposits from VNĐ50 billion with terms from 36 months.

Techcombank has also raised the rates of many terms by 0.4-0.5 percentage points per year from February 7, 2022. Accordingly, the highest savings interest rate at Techcombank is 5.8 per cent per year, up 0.4 percentage points compared to the beginning of January 2022. This rate is offered to priority customers depositing Phát Lộc savings at the counter on 36-month terms or online savings on the same term. — VnExpress News