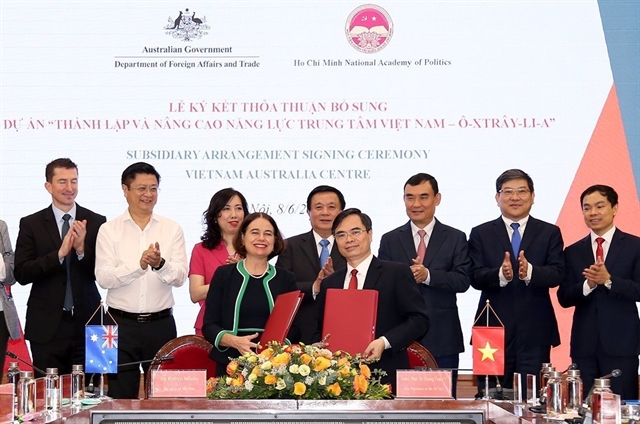 The Hồ Chí Minh National Academy of Politics and the Australian Department of Foreign Affairs and Trade signed an agreement to establish and build the capacity of the Việt Nam–Australia Centre in Hà Nội on Wednesday. — VNA/VNS Photo

HÀ NỘI — The Hồ Chí Minh National Academy of Politics (HCMA) and the Australian Department of Foreign Affairs and Trade (DFAT) will cooperate to implement a project on establishing and building the capacity of the Việt Nam–Australia Centre, under an agreement signed at a ceremony in Hà Nội on Wednesday.

Addressing the event, the director of HCMA Prof. Dr Nguyễn Xuân Thắng stressed that the establishment of the centre is the implementation of an agreement signed by the Prime Ministers of the two countries in 2019.

Australian Ambassador to Việt Nam Robyn Mudie said her country is delighted to support Việt Nam in its efforts to become a developed country with high income by 2045.

The centre’s establishment is an important initiative to realise this support, she stressed, adding that the centre is a symbol of mutual trust, and a priority in the development partnership between the two countries.

The research centre, to be jointly operated by the HCMA and the DFAT through the Aus4Skills Programme, is expected to help improve the capacity of Vietnamese leaders and managers to meet the requirements of integration and development of the country; and contribute to beefing up the close, positive and sustainable cooperation relationship between the two countries.

Immediately after the signing ceremony, the Steering Committee for implementing the project convened its first meeting, during which members discussed the implementation of the project, and the centre’s operation plan in the first year.

Previous Market settles up on rising risk demand
Next Urban development, climate resilience project to be conducted in Vĩnh Long